In the year marking the 100th anniversary of Federico Fellini's birth, the Italian Cultural Institute in Bratislava, together with the Art Gallery of the City of Zilina, is organizing an exhibition of original materials from Archivio Enrico Minisini in Cividale del Friuli, from Frittelli Arte Contemporanea in Florence and the National Film Archive in Prague and Bratislava.

The posters, photo envelopes, posters and works of art on display take visitors into the world of the Dolce Vita, in Via Veneto in Rome, the paparazzi, Italy's economic boom, Marcello Mastroianni, Sophia Loren, Giulietta Masina, Vittorio Gassman, Nino Manfredi and the many movie stars who have characterised an unrepeatable season, in which Italy was trying to leave the wounds of war behind.

Together with the materials related to Fellini's films, there are also other films released during the period when the Rimini filmmaker created his masterpieces, making it possible to make an interesting comparison with the works of Luchino Visconti, Dino Risi, Vittorio De Sica, Pier Paolo Pasolini, Ettore Scola, Mario Monicelli, Marco Bellocchio and other authors who have made the history of Italian cinema. The result is a country willing to be carefree and entertaining, but also the photography of a people that, in addition to enjoying a growing prosperity, begins to ask questions that will lead to the protest of '68.

It is precisely to Fellini that we owe the fact that Italy has become the country of the Dolce Vita for the whole world: the director was able to invent an entire universe, creating an imaginary able not only to tell his generation, but also to foreshadow what would happen in the following years. Fellini, with his films, showed us how, travelling back in time, we can find suggestions for understanding the present. His legacy is still dynamic and alive in today's artistic and creative language.

The Enrico Minisini Archive, made up of tens of thousands of original materials on paper, linked to the promotion of Italian films, in particular from the 50s, 60s and 70s, has been collaborating for years with institutions and museums for the realisation of events, including an exhibition held in Milan on the occasion of Expo 2015.

This exhibition, which takes place under the patronage of the President of the Region of Žilina, Erika Jurinová, is one of the most important events of the thirteenth edition of the Italian festival in Slovakia Dolce Vitaj.

In cooperation with: Embassy of Italy in Slovakia, Archivio Minisini in Cividale del Friuli, Frittelli arte contemporanea in Florence, Art Gallery of the City of Žilina 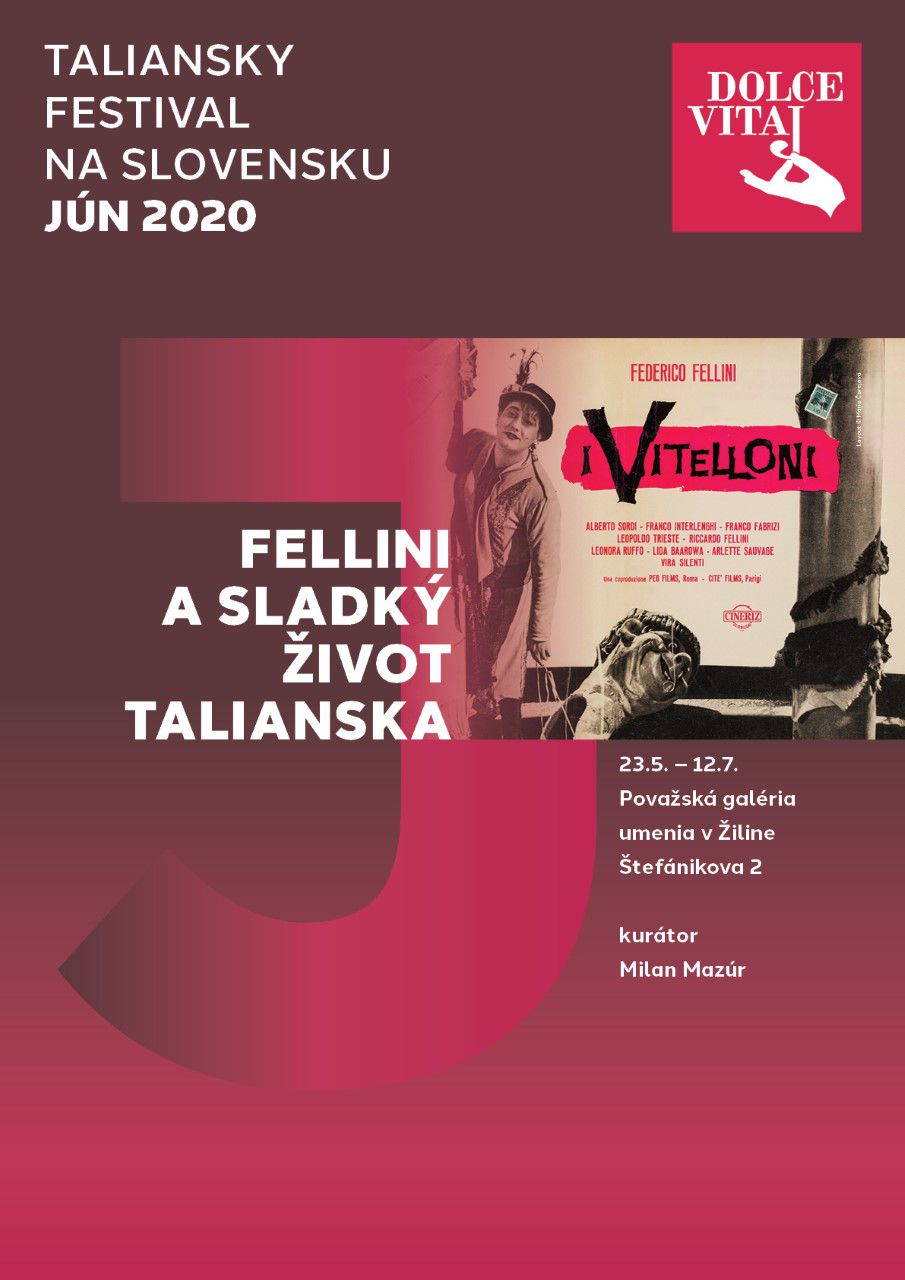