The 2020 edition of the European Literature Night, which cannot be held with the public due to the restrictions imposed by the COVID emergency, is presented for the first time in a different format that will be broadcast on the FM frequencies of a Portuguese radio station, SMOOTH FM, on the evenings of June 27th and 28th, from 9 p.m. to 11 p.m., local time.

The European Literature Night is organized by the Cultural Institutes and Embassies that are part of the EUNIC Portugal network, including the Italian Cultural Institute.
Italy will be represented by the writer Francesco Carofiglio with the novel L'estate dell'incanto, while the actress Beatriz Godinho will give voice to the interpretation in Portuguese of some selected passages of the book

Not being able to be present, Carofiglio gave a long interview to the Institute recorded in the Aria d'Italia program in which, conversing with journalist Marcello Sacco, he tells us about the novel: a story that revolves around magic and the discoveries of childhood lived in a cruel time (we are in Tuscany in the summer of 1939, the eve of the Second World War). A story told by an old woman, ready to surrender herself to death, but not to disenchantment. To listen to Aria d'Italia's podcast click here.

Moreover, Francesco Carofiglio wanted to send a video message of good wishes for the success of the Night of European Literature in the hope of being able to come to Lisbon soon, visible here.

For further information on the Literary Night in Portugal click here.

The brochure in Portuguese can be downloaded clicking on this link. 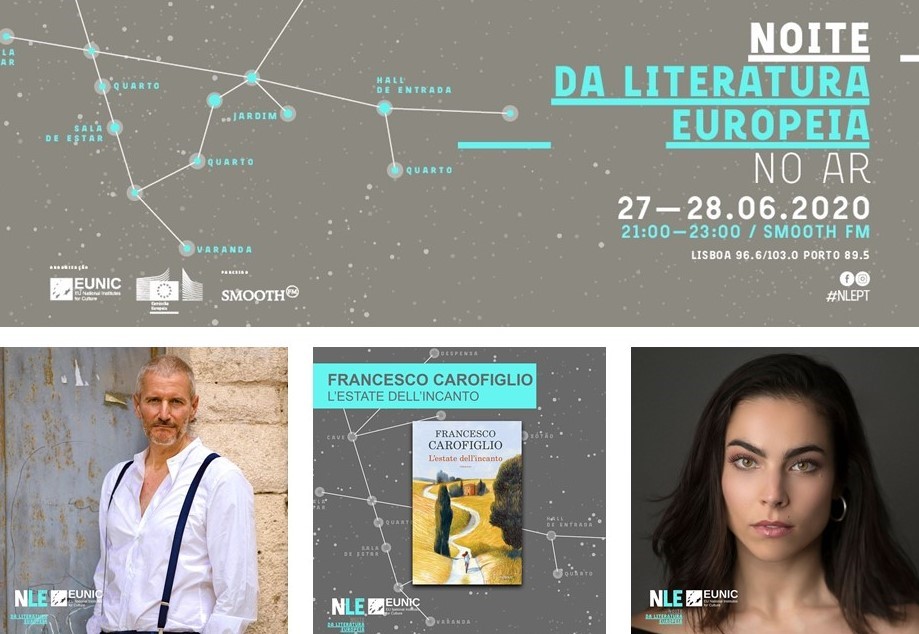 Francesco Carofiglio. Architect and writer. Illustrator, director and theatre actor, theatre, and film author. In 2005 he published his first novel, With or Without you (BUR-Rizzoli), followed in 2007 by Cacciatori nelle tenebre (Rizzoli), a graphic novel written together with his brother Gianrico. Also, for Rizzoli, in 2014, a novel written with his brother Gianrico entitled La casa nel bosco. For Marsilio he published three novels, L'estate del cane nero in 2008, Ritorno nella valle degli angeli in 2009, and Radiopirata in 2011. For Piemme he published Wok in 2013, Voglio vivere una volta sola in 2014, Una specie di felicità in 2016, Il Maestro, in 2017 and L'estate dell'incanto in 2019. For the guys in Il Battello a Vapore his first novel for children, entitled Jonas e il Segreto del Mondo Nero was published in 2018 and in 2020 the second volume of the saga of Jonas entitled Jonas e l’investigatore dei sogni.

L’estate dell’incanto. It is the summer of 1939; Miranda is ten years old and the world is on the edge of the abyss. But she does not know it. That summer will be the best summer of her life. Miranda leaves with her mother from Florence to reach Villa Ada, the home of her paternal grandfather, Marquis Ugo Soderini, in the hills of Pistoia. Her father is elsewhere. Her grandfather's farmhouse and the mysterious woods that surround it are the perfect theatre for reckless adventures together with Lapo, the farmer's grandson, bike rides, dangerous discoveries, the first innocent kiss. But the forest is also the place inhabited by the talking creatures that the child's soul sees or thinks it sees. And the forest always appears, and mysteriously, in her grandfather's paintings, locked in the laboratory that no one can visit. There is like a magical light that illuminates that part of the world. Miranda, now in her nineties, tells us about it, cutting through the mists of memory. To return to those days, to that unaware child, who has not yet seen, lived, suffered, lost, is more than a consolation, it is an antidote. It is the spell of a sudden youth.