The Italian Cultural Institute of Mexico City presents the third edition of the International Prize for the translation of poetry from Italian into Spanish M'illumino d'immenso, organized in collaboration with the Swiss Embassy in Mexico and the Trādūxit Laboratory. Born in 2018, the prize aims to encourage the translation and dissemination of Italian and Swiss-Italian poetry in Spanish-speaking countries. Participants will have to translate two poems into Spanish: Gli ireos gialli, by the Italian poet Luciano Erba, and La carta delle arance, by the Italian-speaking Swiss poet Pietro De Marchi.

The award is organized by Barbara Bertoni (director of Trādūxit, the collective literary translation workshop of the Italian Cultural Institute of Mexico City), Vanni Bianconi (Swiss Italian poet and director of Babel - Festival of Literature and Translation of Bellinzona) and Fabio Morábito (Italian-Mexican poet and translator, professor of Translation at the Universidad Nacional Autónoma de México). The jury of the award will be composed not only by Bertoni and Morábito, but also by Hernán Bravo Varela, poet and translator, director of the Periódico de Poesia at the Universidad Nacional Autónoma de México.

Translators from any country and any variation of Spanish may participate in the competition. The winner will receive as a prize: 10,000 Mexican pesos (about 500 euros); enrolment in a course at the Italian Cultural Institute in Mexico City; books by Swiss poets and writers offered by the Swiss Embassy in Mexico; a week's stay at the Casa delle Traduzioni di Roma (House of Translations in Rome); annual enrolment in the Mexican Association of Literary Translators.

The award ceremony will be held on October 22nd at the Italian Cultural Institute in Mexico City, on the XX Week of Italian Language in the World. 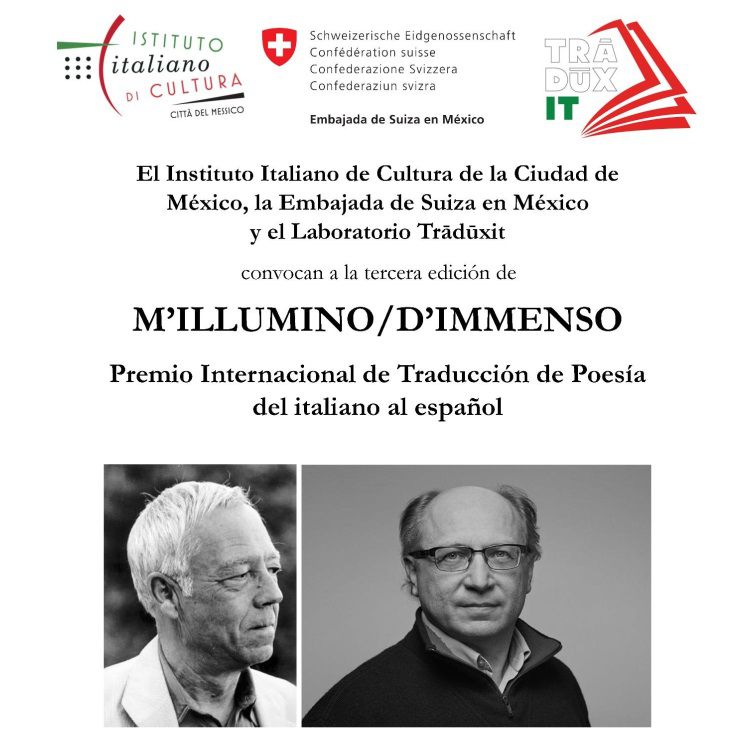