The Italian Cultural Institute in Tirana announces a screening of the film ‘Un figlio di nome Erasmus' ['A son named Erasmus'] (2020) scheduled for today 9 August (at 9 pm) as part of the Institute's CineClub initiative and the 6th Notti del Cinema Italiano film festival @ Reja.al. Directed by Alberto Ferrari, the film tells the story of four friends, Pietro (Ricky Memphis), Enrico (Daniele Liotti), Ascanio (Luca Bizzarri) and Jacopo (Paolo Kessisoglu), who were so close in their youth that they shared an extraordinary experience: Erasmus, in Portugal. Twenty years later they have each taken a different path but now, in their forties, a sad event brings them back together: the woman they all loved has passed away. They travel as a group to Lisbon for her funeral, unaware that she has left them an unusual legacy: a son named Erasmus; one of them is the father. Between having their DNA analysed and rediscovering the lightheartedness of the past, the four friends reflect on the second chances of life. 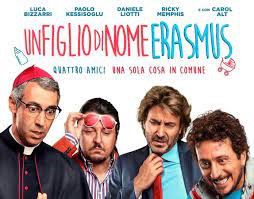