An exhibition on the Minaret of Jam, one of the first Afghan sites to be selected as a UNESCO World Heritage Site, has opened at the Italian Embassy in Kabul and will run until 25 August. The exhibition compares three-dimensional documents made during a recent archaeological expedition to the Minaret with photographs taken in the 1960s and 1970s by Italian architect Andrea Bruno. It can be visited at the Exhibition Pavilion of the Gardens of Babur in the historical centre of Kabul. Minister of Finance, Mohammad Humayun Qayoumi, UNESCO Director for Afghanistan, Patricia McPhillips, and Italian Ambassador, Roberto Cantone, all attended the opening.

The Minaret of Jam is in western Afghanistan, near the Hari River. Standing 65 metres tall, it rests on an octagonal base 9 metres in diameter and is built entirely of baked bricks. Decorated in stucco and glazed tiles, and featuring geometric designs and verses from the Qur’an, it is a fine testament to the level of development that had already been reached by Afghanistan and Islamic culture by the twelfth century.

The Italian Ambassador to Kabul, Roberto Cantone, opened the exhibition by remarking on Italy’s contribution towards safeguarding this monument since it first came to worldwide attention in the 1950s. He noted the important work carried out by architect Andrea Bruno, who also designed the buildings housing the Residence and Chancellery of the Italian mission to Kabul. Minister Qayoumi said that the exhibition formed part of the National Programme for the promotion of culture in Afghanistan, an attempt at reconstructing national identity “in a time in history that is so important for the fate of this country”. UNESCO Director Patricia McPhillips then underlined President Ghani’s personal interest in safeguarding the Minaret and thanked the international community for its guaranteed support at the archaeological site. 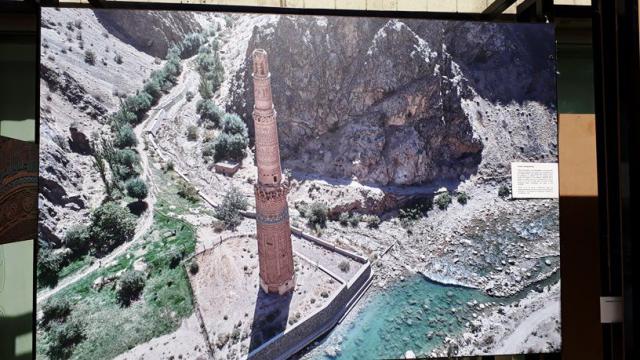