The captured soul of landmarks in an exhibition in San Francisco

Stefano Forgione and Giuseppe Rossi – two Italian artists who create works of art in historic and landmark sites by using the natural proliferation of moulds on jute  – are the guest stars of an exhibition that opened yesterday at the Museo Italo Americano of San Francisco. The exhibition, titled “Genius Loci”, is sponsored by the Italian Cultural Institute in San Francisco under the patronage of the Italian Consul General and with the support of La Scuola Internazionale. It will run until 9 June.

The two artists work under the pseudonym of TTOZOI and the exhibition is titled GENIUS LOCI, precisely to draw people’s attention on one of the most particular aspects of their creations. In fact, all their works are created in impressive sites of great general interest so as to ‘capture’ the spirit of these sites and transfer it onto the canvas. The works displayed were created in the Royal Palace of Caserta, in Pompei and in Rome’s Jewish Ghetto.

TTOZOI has now been authorised by the Golden Gate National Recreation Area to create a series of artworks at Fort Point, an iconic United States National Historic Site under the Golden Gate Bridge, as part of the Art in the Park programme. The site, like all the others, has been chosen because of its age-long history, importance and “soul”. The artistic creation process will be open to the public.

The technique used by this pair of artists is complex. First, they paint the jute canvas with an organic substance composed of a natural pigment, water and a variety of flours. They then seal the work in a container that is left on-site for several months, which enables the moulds to proliferate naturally. The artists closely monitor the progress made by the spores and decide when to suspend it. At that point, the canvases are protected with certain resins that do not, in any way, make the result less natural. 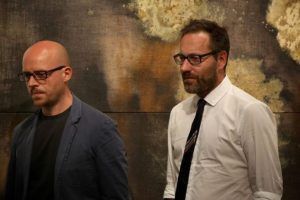