Turkmenistan and the Silk Road – A tribute by Italy to Ashgabat

The Silk Road and its intense programme of cultural, artistic and technological interactions is at the core of the exhibition “The Silk Road and Turkmenistan – A tribute by Italy”, staged by the Italian Embassy in Ashgabat’s principal museum with the sponsorship of the UNESCO.

Throughout the month of October, 150 High-Definition photographic reproductions, accompanied by panels explaining the different sections, will illustrate the many cultural, artistic and technological inputs of the Silk Road on Italian and European culture. One of the sections is dedicated to the excavations that three archaeological missions from Turin, Bologna and Venice are performing in the Country and another section, curated by the local Chinese Embassy, focuses on the artistic inputs to China from the West.

The exhibition itinerary was entirely designed and curated on site with the collaboration of Luigi Laudanna, and organised as part of the “Italian Way of Life” programme.

The didactic function that the exhibition offers through the numerous stimuli on the rich theme of the Silk Road was highlighted by Italian Ambassador, Diego Ungaro, in his exhibition inaugural speech at the Museum of Fine Arts, in the presence of the Deputy Prime Minister for culture and mass media, Bahargul Abdyeva, the Minister of Culture, Atagely Shamuradov, the Chinese Ambassador, Sun Weidong, and of a large number of the diplomatic corps and experts. Ambassador Ungaro recalled the contribution made to the Country’s archaeological heritage through the more than twenty-five years of archaeological missions from Turin (Centre for Research and Excavations), Bologna (the University) and Venice (Fondazione Ligabue/Centro Antiqua Agredo).

Deputy Prime Minister Abdyeva defined the initiative as one of this year’s most important events dedicated to the role of Turkmenistan, which lies in the middle of the Silk Road. On his part, the Chinese Ambassador expressed his appreciation for the initiative and recalled Beijing’s One Belt Road project. 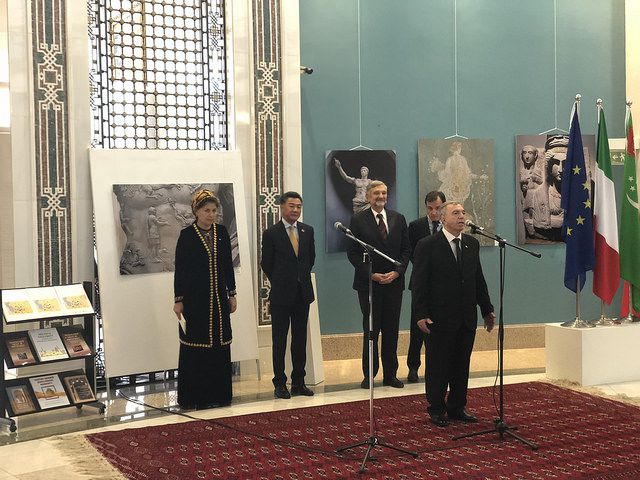