Exhibits in terracotta, bronze and gold, statues, in addition to frescoes and furnishings from the area of the Vesuvius dating back to the Roman era, will be on display in five prestigious museums in China.

The exhibits will be on show at the Archaeology Museum of Chengdu until 3 May, at the Qinshihuang Mausoleum Museum (1 June – 24 August), at the Tianjin Museum (21 September – 14 December), at the Wuhan Museum (8 January – 2 April 2019), and also at a fifth museum that is still to be selected.
“Today, thanks to archaeology, we are on an ideal journey beyond the sphere of time and space: who would have ever imagined being able to admire the artefacts of the Vesuvius area, which were brought back to light concomitantly to the terracotta warriors of the first Chinese Emperor, Qin Shi Huang? The exhibition that we have just opened represents a real opportunity for cultural dialogue between Italy and China. As of today, all those visiting the ‘Pompeii –The Infinite Life’ exhibition will come into contact with our antiquity and with the deepest roots of our Country’s historic and cultural heritage. We are very proud that our Chinese friends, who have age-old traditions of their own, look on Italy and its culture with interest,” said Undersecretary Bianchi at the ribbon-cutting ceremony for the “POMPEII- THE INFINITE LIFE” exhibition set up at the Jinsha Archaeology Museum of Chengdu.

The idea arose from a project by the Beijing-based ChinaMuseum Ldt company, which provides content to more than 500 Chinese museums, in cooperation with the Directorate General for Museums of the Italian Ministry of Cultural Heritage and Activities and Tourism (MiBACT).
It is a journey across the centuries and cultures of the two Countries that transforms into a contemporary version of the “Grand Tour” and transports to China the myths of European culture for an encounter with China’s immensely vast cultural heritage.
He went on: “China has long been our cultural partner: it is no coincidence that it was precisely from Italy, from Venice, the city of Marco Polo, that the EU-China Year of Tourism kicked off last January, an invaluable opportunity to embolden our relations, knowing that economic and tourism relations will not be simply fulfilled with the growth in trade but also involve ties of friendship between different national communities. And the launch in Venice reaffirmed Italy’s importance as a strategic and commercial hub on the Mediterranean side of the Silk Road. Our aim is to build a continuing and permanent dialogue between the world of art and culture and our Countries’ creative industries. This is the deepest sense of the ‘Pompeii –The Infinite Life’ exhibition that will be hosted in five of China’s major museums: create an encounter for the invaluable cultural resources of our Countries. Allow me to recall that China and Italy possess the largest number of UNESCO World Heritage sites. In brief: a new Silk Road of knowledge and culture.”
The Italian Consul General in Chongqing Filippo Nicosia remarked: “Undersecretary Bianchi’s new visit to Chengdu to inaugurate the exhibition on Pompei is proof of Italy’s and China’s commitment to strengthen their cultural relations along the New Silk Road. President Mattarella’s words take on a particular importance here, as he said that the One Belt and One Road Initiative (OBOR) is not only a commercial and infrastructure project but also an incredible opportunity to create new channels for cultural exchange and mutual knowledge. To this end, the projects that we discussed here will take on a special importance in strengthening cooperation between the museums of the two Countries, co-organise workshops on archaeology and restoration techniques and the exchange of exhibitions.”
The ribbon-cutting event was attended by the Deputy Director of the Propaganda Office of Sichuan, the Director of the National Archaeological Museum of Naples, Paolo Giulierini, the Director General of the Committe for Culture and the Press of Sichuan Province and the Italian Consul General in Chongqing Filippo Nicosia. 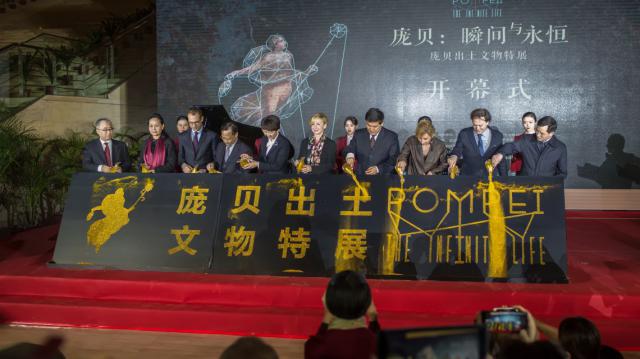