The State of the Union

On the 70th anniversary of the Schuman Declaration, we meet again - albeit with the distance imposed by the current pandemic - to take stock of the State of the European Union. I want to thank the President of the Dehousse European University Institute and greet all the guests connected.

The devastating impact of the pandemic is somehow comparable to that of a war.

In 1950, European states were in the aftermath of a terrible conflict that had torn families and consciences apart and fomented resentment among peoples. Men and women of that generation, while facing reconstruction, took the courageous decision to recompose the fractures and unite what had been destroyed, starting from the reconstruction of an "organised and vital" Europe.

Thanks to their political vision, our Continent has laid the foundations for seventy years of peace, stability, rights, and prosperity; positive results which, however, faced with the current emergency, must be reaffirmed.

Our work is not finished. Much remains to be done to transform the European Union into an organisation ready to respond effectively and concretely to the needs of all its citizens, from Palermo to Rotterdam, from Porto to Krakow.

The COVID-19 challenge confronted us with the fragility of our achievements and with the fundamental character for our lives and economy.

- Some neighbouring countries, at the beginning of the pandemic, began to close their borders with Italy; there were requests for 'COVID FREE' certifications on Italian products;

- Italy has received aid in terms of personal protective equipment first from non-EU countries and then from EU countries.

Faced with this situation, we realised how limited our lives would be if suddenly the four fundamental freedoms that we enjoy [free movement of people, services, goods and capital] and reliable and credible institutions that guarantee their respect, no longer existed.

What Italy has asked for is a real demonstration of solidarity on the European side.

A passage from the Schuman Declaration of May 1950 states: " Europe will not be made all at once, or according to a single plan. It will be built through concrete achievements which first create a de facto solidarity". This solidarity, among other things, has already arrived in part through the apology made to Italy by President von der Leyen.

All this can be achieved, definitively, thanks to the commitment to change course made by the Lady President and the President of the European Council, Michel.

A range of tools has been implemented to overcome the pandemic crisis in a coordinated effort with the other Twenty-seven countries.

The top priority we all share is to save lives. I want to take this opportunity once again to thank our European partners and the countries of the Western Balkans. They have helped us with medical and nursing staff and medical equipment, thus demonstrating their solidarity.

For the EU, it has been essential to conclude joint procurement agreements in the health sector to address the shortage of personal protective equipment, ventilators, and medicines. It has been vital to take action on export bans unilaterally introduced by some Member States to bring them back to Commission coordination, to implement emergency cross-border health cooperation, which has made it possible, albeit amidst initial difficulties, and to assist Member States under domestic pressure.

It is also worth mentioning the joint research activities launched under the Horizon 2020 programme to co-finance research projects on epidemiology, diagnostics, therapeutics and clinical management in the containment and prevention of coronavirus, as well as public-private partnerships with the pharmaceutical industry to develop a vaccine.

Research into the vaccine and its accessibility is essential. I would like to remind you that Italy was the first country to openly promote the establishment of an international alliance for research, access, and fair distribution of the vaccine. I made the first proposal to the Foreign Ministry of the G7 on March 25, promoting it then with the summits of the United Nations and the World Health Organization.

Our voice was joined by that of many other European partners, until the launch, a few days ago (May 4), of the 'Pledging Conference' for Global Coronavirus Response, under the co-chairmanship of the leaders of the European Union, France, Germany, Italy, United Kingdom, Norway and Saudi Arabia.

Our country will give a contribution of €140 million to the global collaborative platform for research, development, equitable distribution of the vaccine and other therapeutic and diagnostic treatments against the coronavirus, as well as for the strengthening health systems and global immunisation.

Health is a public good, which must be guaranteed to all citizens and whose importance must also be recognised at the level of resources that I hope the Union will devote to the sector from now on.

The need to ensure resilient health systems, mechanisms to protect the health of vulnerable groups and effective research to ensure rapid and shared results highlights the need for a review of the policy lines developed so far for the future of the EU.

We cannot forget that the health emergency has confronted the European Union with the most severe economic crisis in its history. The response we are giving and will give will inevitably define the future of the Union.

The first responses went in the right direction: the removal of European constraints on Member States' action, both in terms of debt and state aid to businesses; the emergency package, with the new SURE instrument for financing unemployment and health benefits; and the strengthening of EIB loans. Further measures are urgently needed.

A quantum leap must be made by defining a structural response by the Union. The response can only be an excellent plan for reconstruction, a real Recovery Plan, which will have to redefine the added value of Europe in the lives and needs of its citizens. The new fund must finance itself on the market, gathering the resources needed to relaunch the European economy. Action must be taken now.

The EU economic response to the crisis, to which I referred earlier, must help us to reflect on the incomplete nature of our Economic and Monetary Union. If we had equipped ourselves in good time with effective macroeconomic stabilisation instruments, including those financed by European bonds, we would not have to devise solutions in the wake of the emergency. However, we would be ready to prevent the recession from escalating automatically.

COVID also imposed on us, in addition to the economic and health response, a reflection on how to imagine our common future. Solidarity and the ability to manage emergencies need strong institutions.

An opportunity to talk about it will be the next Conference on the Future of Europe. Italy - which has always been a protagonist in the process of European integration - is ready to contribute with its ideas and experience.

A pan-European process of bottom-up consultation of citizens on the future of the European Union, one of the cornerstones of President Von der Leyen's programme, should have started in these days.

And at a Conference on the future of Europe, we hope for greater involvement of the citizens, who have responded with great responsibility to the measures restricting individual freedoms imposed to control the spread of the pandemic.

Looking at the future, we also expect a reaffirmation of the EU's global role and our capacity for joint action, particularly in our neighbourhood in the enlarged Mediterranean - a region to which we dedicate the MED Dialogues international conference in December each year - and in Africa, where the pandemic risks exacerbating conflicts and creating new ones.

Our shared objective, speaking today of the State of the Union, is to achieve a strong, determined, cohesive Europe that always has the values underpinning its identity. This strong Union, which is close to its citizens, must also serve as a compass for the global geopolitical situation, with particular reference to relations with the United States and China.

To be stronger, we need to achieve real unity of EU action, so that it speaks more and more with one voice. The strength of the Union lies in its 27 Member States. In this way, the EU will be able to interact with other world powers and represent that factor of stability and security at a global geopolitical level.

Solidarity and cooperation are the two pillars on which not only our response to the pandemic must be based, but the concrete project of a sustainable and fair future for Europe and its citizens.

Thank you and all the best. 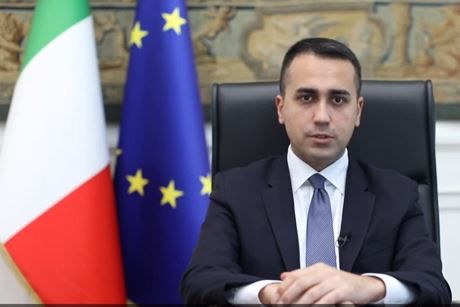