In an interview with Le Monde, Luigi Di Maio makes an appeal for solidarity among Europeans in the face of the coronavirus epidemic and criticises the attitude of his former ally Matteo Salvini and of Marine Le Pen – who are calling for the closing of national borders.

Luigi Di Maio has been serving as Italy's Foreign Minister since September 2019. Until last January he was also political chief of the anti-establishment 5 Star Movement, which has suffered severe losses in the elections held since it went into government 2018, first in a coalition with Matteo Salvini's far-right League Party and then with the centre-left Democratic Party. Mr. Di Maio granted this interview to Le Monde in connection with the Franco-Italian Summit in Naples, held on Thursday, 27 February.

Regarding the coronavirus epidemic, what does Italy expect from its partners and, in particular, France?

I wish to thank the French Government and Emmanuel Macron for coming to Naples at such a difficult time. It is a gesture of support for Italy, as well as a signal to the international community as a whole.

Last Tuesday afternoon there as meeting, in Rome, of the Health Ministers of Italy's neighbouring countries, which was an opportunity for us to illustrate the measures we have taken. It was highlighted there how the outbreaks are mostly confined to two specific areas, one in the Province of Lodi with a population of 47,000, and another centred on the town of Vo Euganeo, in Veneto. All the other cases reported throughout Italy, down to Sicily, originated from these two areas.

What we're trying to explain to everyone is that it is nonsensical to advise against travelling to Italy as a country, or to other regions like Friuli-Venezia-Giulia, where there are no outbreaks. Likewise, it is senseless to advise against travelling to the rest of Lombardy. Como is about a hundred kilometres from Lodi… Until the schools are still open everyone should feel safe. Any infected people are quarantined and treated. Because you can recover from coronavirus.

Our work is hampered by the fact that we still haven't found the patient zero. But the same problem will undoubtedly occur elsewhere, given that many infected people show no symptoms and the existence of  healthy carriers is a great complication. For the time being the eleven towns affected by the lockdown account for less than 0.1% of the entire country.

How do you reply to the calls to suspend the Schengen Agreement?

We felt offended by Marine Le Pen's calls to close the borders between our two countries. Although she has consistently claimed her friendship with our country, and especially with a certain political party [Matteo Salvini's far-right League Party, editor's note], we now find that we have become the victims of the  souverainistes of another Country.

Does this mean that the souverainistes cannot be friends?

Let's say that souverainism is based on the principle that "our country comes first". According to this approach, there can be no solidarity, we need to take this into account. If we call for help, some will answer our call, while others will shut the door on us.

I found real solidarity among the Health Ministers of Italy's neighbouring countries, also by explaining to their respective public opinions that it would be pointless to suspend free movement. Those who are calling for the borders with Italy to be closed are hurting our country: hundreds of thousands of people cross those borders every day for work.

But aren't these problems of perception outside Italy due to internal reasons, in particular the contradictory communications coming out of the Regions?

We must never forget that this is an unprecedented situation, not just for us but for the entire international community. This is why, for several days now, we have been looking into the European Treaties to understand whether there is space for receiving aid or budget relief. We will need to help certain sectors, tourism for example, in the face of up to 80% of booking cancellations in some regions.

The regions are doing the best they can. Relations with Attilio Fontana and Luca Zaia [presidents of the regions of Lombardy and Veneto, both members of the League Party, editor's note] are very good. We're having more problems with the regions untouched by the infection. The announcement by the presidency of Basilicata, for instance, that it intends to quarantine any people visiting from Veneto or Lombardy, is of no help whatsoever and helps spread the idea that maybe it's not safe to travel to Basilicata. Marche is another example, their decision to close down schools in the region is giving the whole world the impression that Marche is not a safe place to go to.

Apart from the fight against coronavirus, which are your priorities for the coming days?

If we manage to show the world that the situation is under control, we may emphasise that, in a Country of 60 million the areas on lockdown only concern 47,000 people.

We are also looking to launch a campaign against fake news. Certain Countries that are not well-informed about the situation in Italy will obviously continue to include us in a blacklist of travel destinations, so we need to convince them, one at a time, with the greatest possible transparency.

Yet you adopted the same reaction against China …

We have always been in touch with our Embassy in China, since the beginning of the crisis, highlighting how the danger was restricted to the city of Wuhan. Our diplomatic staff has remained on the ground, there are 4,000 Italians still in the Country, and we have always assured China of our collaboration. Furthermore, 3,000 Italians who had left China are returning to the Country.

How have your European counterparts reacted?

The unanimous message is we are close to you and will help you. This is of fundamental importance, because 32% of our GDP comes from exports and 15% from tourism, while foreign investments account for 25% of the Italian GDP. We work with the whole world.

What I ask for is the circulation of accurate information, because some media outlets, in Italy and abroad, are spreading false news to harm our Government. We are adopting al the possible precautions. To date, we have carried out 10,000 tests, which, I believe is an absolute record, unparalleled elsewhere.

Let's return to the relations between Italy and France. In February 2019 your visit to the “yellow vests” prompted a diplomatic crisis, with the French Ambassador in Rome being called back to Paris. Has this episode been finally forgotten?

Yes, it is in the past. Since my appointment as Foreign Minister, in September 2019, I have had consistently collaborative relations with Jean-Yves Le Drian. Our relations have since improved and the business agreements we will be signing in Naples are very important, which is why I am particularly pleased that they are being signed in this city. Tomorrow everyone will see that France and Italy are once again forging a common path together.

The Libyan dossier has often been a source of tension between Paris and Rome. Does the fact that Turkey and Russia have taken on a role in the conflict change things?

I am on the same wavelength as my French and German colleagues. We're working well on Libya, firmly convinced that we shall not supply arms to the warring factions and will focus exclusively on diplomacy.

And which is Italy's position since the «Sophia» mission for patrolling the central Mediterranean was called off?

We have an agreement in place with the Libyan coastguard which, I must emphasise, is not final yet, but it allows us to contain the flow of migrants. With the European Union we have decided to establish a new mission for enforcing the embargo on arms and, at the same time, train the Libyan coastguards. Without these measures the war will never end.

In recent years, Italy has strengthened its position in the Sahel, south of Libya. How do you see cooperation with France in that region?

France is actively engaged in the struggle against terrorism. However, I do not believe that a single Country can make it on its own, especially considering that what we need in the Sahel region is a social and economic, and not just a military, approach. The initiative must come from the West African Countries themselves, which we must help stabilise.

How would you described your personal relationship with Emmanuel Macron?

We met at the China International Import Expo in Shanghai last November. He told me himself that we need to establish a much closer working relationship. This is a historical moment in which Italy and France have a lot in common, with regard to the European budget, for example, and a lot more besides. We can create many new things together and, together with Germany, inspire the future of Europe. 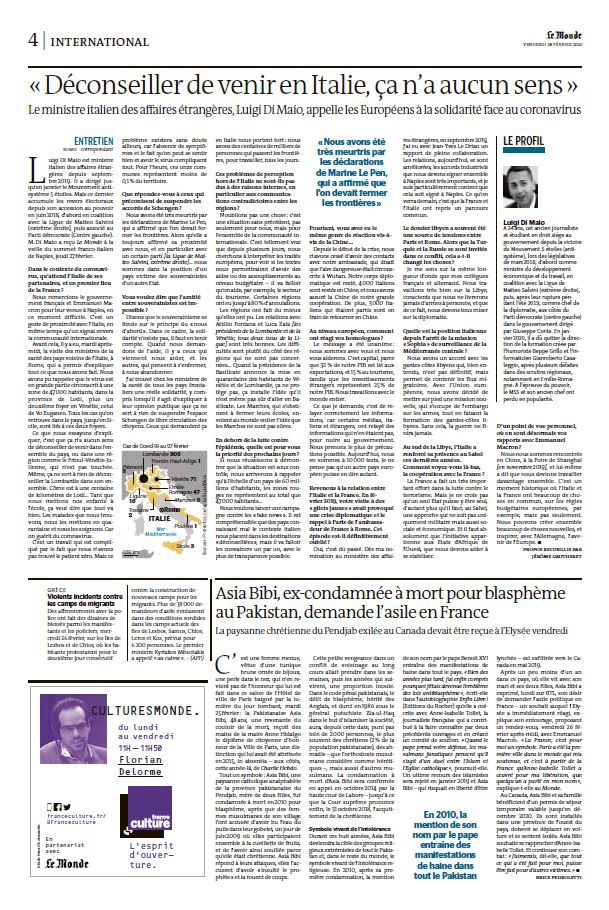 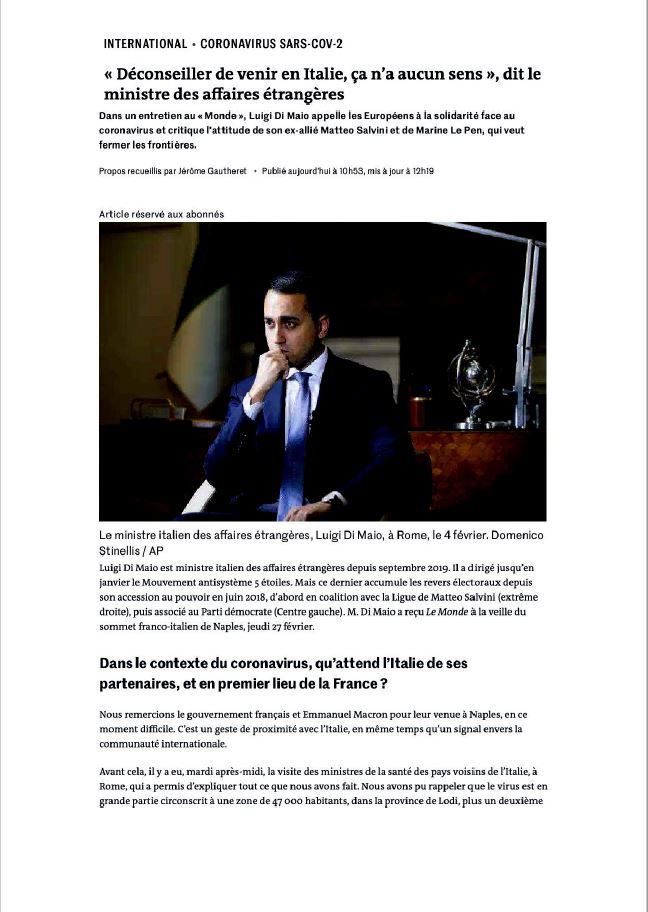 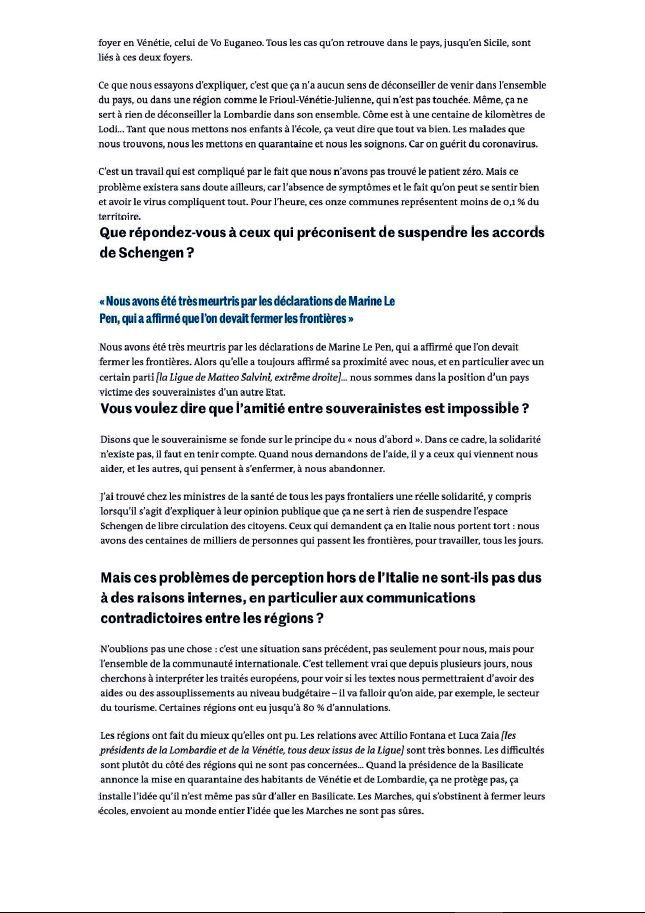 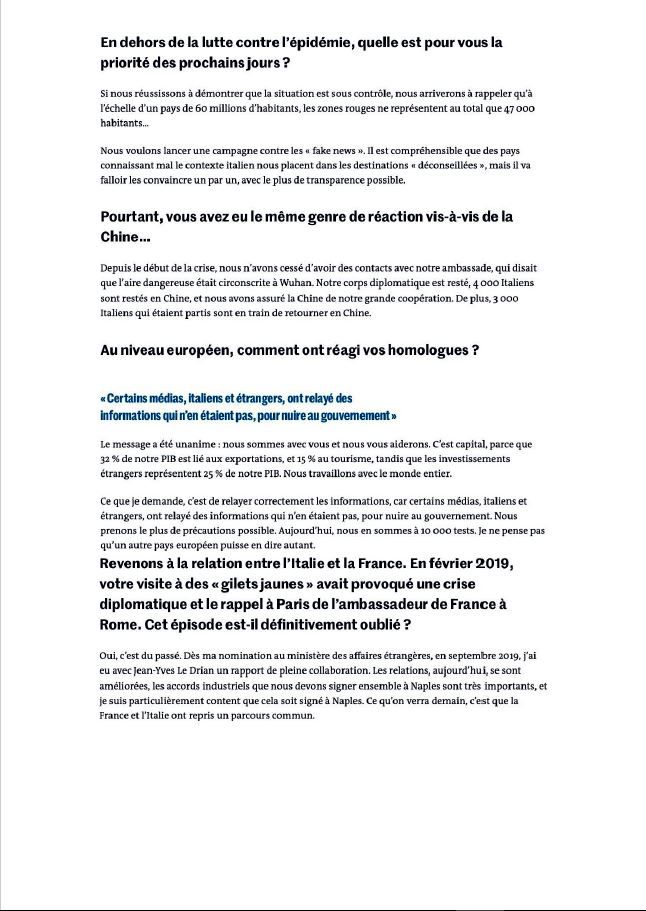 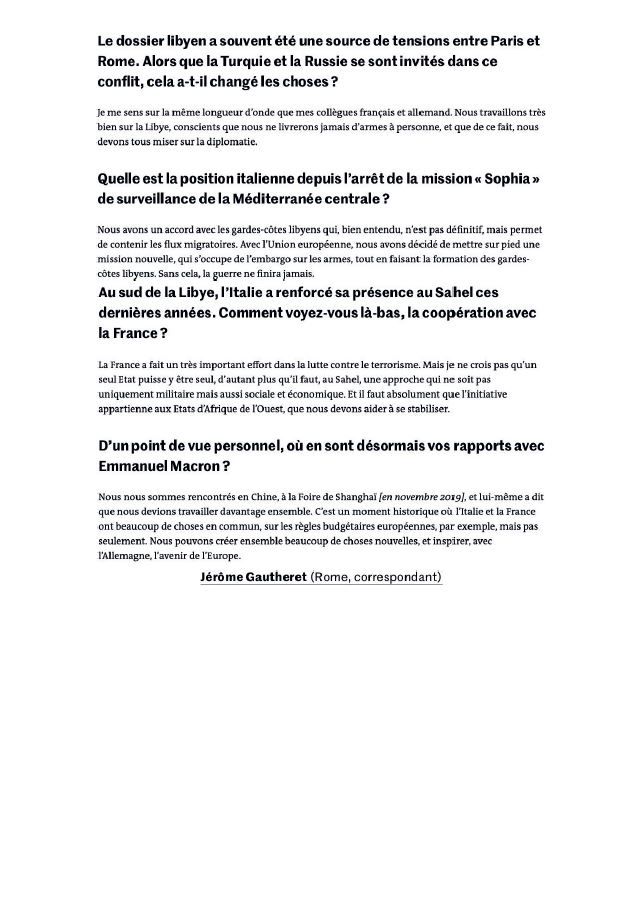