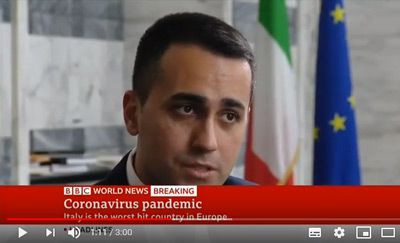 Coronavirus has claimed 1,016 lives in Italy, officials say, but Foreign Minister Luigi Di Maio says he hopes his country will be the first in Europe to get over the emergency.

However, Mr Di Maio told the BBC the measures imposed in the first area of the outbreak were proving effective.

Two weeks after the first 10 towns in northern Italy were declared a "red zone" and put under lockdown, he said they had no new infections.

This then served as a model to tighten measures across the country.

Italy has now seen 1,016 deaths, amid a total number 15,113 infections. Civil protection officials say 1,258 have recovered, although the number of cases has gone up by 2,651 since Wednesday. Italy is the world's worst-hit country after China.

"Italy was the first nation in Europe to be affected so badly," said Mr Di Maio. "But I hope it also means that Italy is the first one to leave the emergency behind."

Movement has been limited to urgent medical or professional need. All shops are now closed, except for pharmacies and those stocking food; companies have been ordered to shut non-essential departments; a wide range of venues - from theatres to schools and hairdressers to museums - are closed.

"Our grandfathers were drafted to go to war; we're being asked to stay at home," said Mr Di Maio.

"If a doctor and a nurse can work for 24 hours non-stop, we can give up leaving our own home. The huge majority of citizens are respecting the rules. Those who aren't will face sanctions: either fines or criminal charges." Italian authorities say it could take two weeks for the impact of the restrictions to be seen on the coronavirus outbreak nationwide, which is still surging in towns and cities outside the initial red zone. As the outbreak in China begins to ease, the government in Beijing is sending Italy teams of specialist doctors and supplies. Countries across the world have grounded flights to Italy or banned entry to Italians or anyone travelling from Italy. Austria and Slovenia are placing restrictions on their borders with Italy. Italy is now facing its biggest crisis since World War Two. The government has pledged to spend €25bn ($28bn; £22bn) to tackle it - three times more than it estimated it would need just a week ago. The economy is now expected to slide into deep recession.

But the foreign minister sounded a note of optimism, with a message to the international community that "Italy will make it and Europe will make it - I'm sure".

And he offered to share the experience and knowledge that the Italian government had built up since the outbreak began with any country that needed it.

Italian nationals living in other countries have also reported individual acts of hostility towards them, deplored by the foreign minister as "unacceptable discrimination", prompting "interventions" from his government.

A handful of politicians here have been infected with the virus or are in preventative self-isolation, including the leader of the Democratic Party, part of the governing coalition.

Mr Di Maio said he had been tested - and was negative.

"We need oxygen units, and we have started production with factories that produce them or others that can adapt to start producing them," said Mr Di Maio. "We're in contact with countries across the world, many of them are willing to supply us with equipment."

But, he says, the purchase of medical supplies should be organised at a pan-European level, with a single unit to resupply hospitals and clinics.

It is placing exceptional strain on Italy's healthcare system - one of the best in Europe.

The government has named a new commissioner to deal with the virus, Domenico Arcuri. He will co-ordinate the programme to resupply hospitals with equipment they urgently need.