The IORA was founded on 7 March 1997 for the purpose of facilitating exchanges and investments between the Countries with coastlines on the Indian Ocean. The aim was to do this by promoting sustainable economic cooperation in priority sectors such as maritime security, sustainable fishing and the blue economy, disaster prevention, academic, scientific and technological collaboration, and tourism.

This year the “IORA Day 2021” celebrations were organised by the IORA Secretariat, under the guidance of the United Arab Emirates, who currently hold the presidency of the organisation.

Italy – along with China, South Korea, Egypt, Germany, Japan, Great Britain, the United States, and Turkey – has been the organisation’s dialogue partner since 2019 and decided to celebrate the occasion with an online event. This was attended by Deputy Minister Manlio Di Stefano, IORA Secretary General, Gatot Gunawan, and the Italy-IORA Committee’s Secretary General, Laurence Martin. 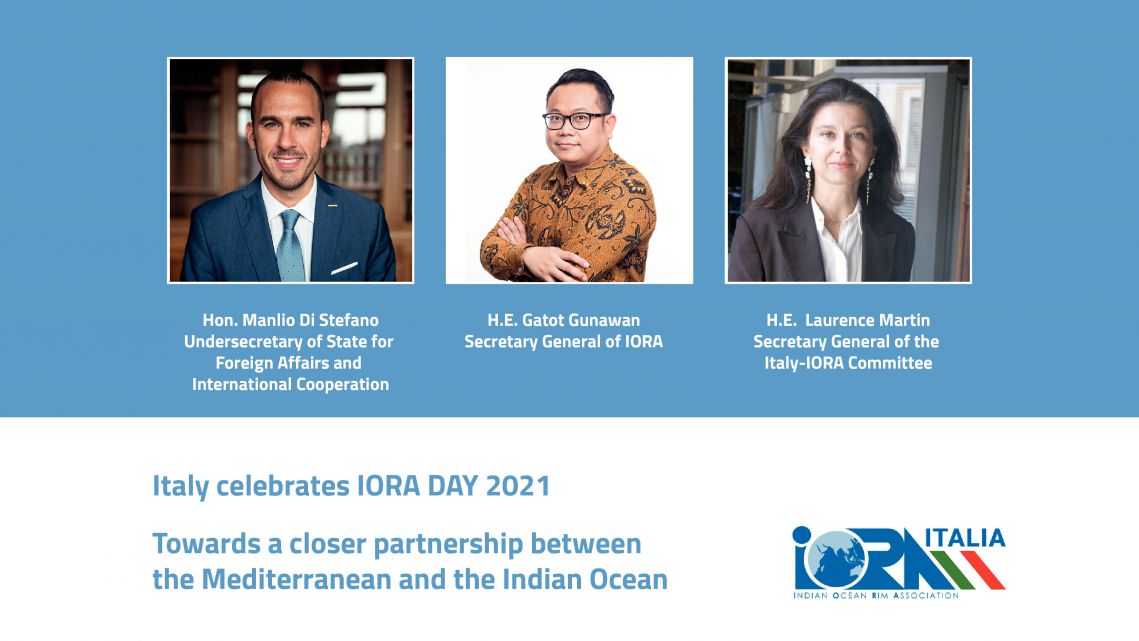 “From the very first stages of our dialogue partnership,” recalled Deputy Minister Di Stefano in his talk, “we have been able to count on a really efficient team of IORA Ambassadors in Rome. Thanks to their active involvement with our Italy-IORA Committee, which brings together the main Italian players in the blue economy, in 2020 Italy shared experience and ideas on fishing, aquaculture, clean energy, and sustainable shipping, by means of numerous webinars and events.”

On his part, the Indonesian Secretary General of IORA, Gatot Gunawan, mentioned Italy as an example of good practice, also due to the attention we give to involving the private sector and our multi-stakeholder approach. This has brought about the setting up of an Italy-IORA Committee that brings together the leading Italian entities in the Blue Economy sector, and by the online launch of an “Italy-IORA Platform” that acts as a catalyst for the development of ties between our Countries’ leading figures in the blue economy.

The entrepreneurial world was represented by the Secretary General of the Italy-IORA Committee, Laurence Martin, who pointed out the interest shown by numerous public and private bodies in Italy who make up the committee, and the conviction that cooperation between Italy and IORA can provide mutual advantages, thanks to the opportunities that the extraordinary development of countries in the Indian Ocean region offer companies from all the countries involved.

The input by participating authorities can be seen on the

Undersecretary Manlio Di Stefano's mission to Pakistan wound up after a tight two-day schedule of...

Undersecretary Manlio Di Stefano's mission to Pakistan wound up after a tight two-day schedule of...