Shared initiatives in terms of cooperation that may come about and be coordinated within the European framework for migrations, focussing particularly on the Maghreb, Sahel, and West African Countries have been at the centre of talks today by video conference, between the Vice Minister of Foreign Affairs, Marina Sereni, and Spain’s Secretary of State for International Cooperation, Angeles Moreno Bau.

“Italy and Spain share an all-round approach that gets to the deep roots of migrations along with aspects related to security and combating human trafficking”, has stated Vice Minister Sereni, backing Spain’s proposal for a common European initiative.

Vice Minister Sereni has also pointed out the main events of Italy’s G20 Presidency, which puts the so-called 3Ps (People, Planet and Prosperity) at the centre of the debate, beginning from the Ministerial Summit on development, planned in Matera on 29 June.

A great deal of attention, in part due to the situation brought on by Covid-19, is to be paid to the need to work together on some crucial issues such as food safety, combating waste and a commitment to a healthy diet, which are behind the United Nations’ Food Coalition and Food Systems Summit 2021, which will be preceded by a Pre-Summit planned in Rome, at the FAO headquarters, in July this year.

Finally, the situation in Venezuela, which Vice Minister Sereni has said is “very worrying from a humanitarian viewpoint”. Both the Vice Minister and the Secretary of State have agreed on the need to alleviate the suffering of the population, and to call the parties to dialogue that leads to a peaceful and political solution to the crisis. 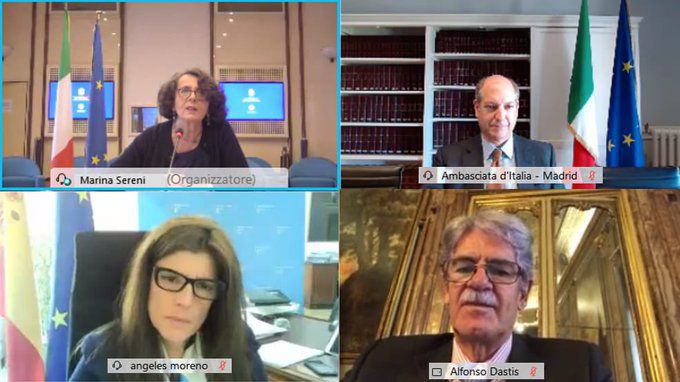 ​Tajani: “The time has come to work towards a just agreement for Ukraine” (la Repubblica)

ROME – “Italy is very interested and will support any political and diplomatic initiative that...

Note of the Foreign Ministry

The Farnesina condemns, in the strongest possible terms, the serious criminal act committed against First...

Undersecretary of State for Foreign Affairs and International Cooperation Mr Giorgio Silli attends the 29th Ministerial Council of the Organisation for Security and Co-operation in Europe (OSCE) – 1 December 2022, Lodz, Poland

The Undersecretary of State, Giorgio Silli, has attended the 29th Meeting of the Ministerial Council...

Eighth edition of the MED-Dialogues Conference organized by the Ministry for Foreign Affairs and International...