“Today we discussed concrete measures aimed at strengthening our bilateral relations. Thailand is for us a primary trade partner in the ASEAN and a privileged destination for numerous Italian enterprises,” said the Minister of Foreign Affairs and International Cooperation, Angelino Alfano, at the end of the meeting he had at the Farnesina with his Thai colleague, Don Pramudwinai.

The meeting, which falls within the framework of the 150th anniversary of the establishment of diplomatic relations between Italy and Thailand, was held less than one month after the mission by the Italian Foreign Minister in South-East Asia, who stopped in Bangkok last 9 February.

During the talks, Minister Alfano reaffirmed Italy’s and the European Union’s expectations for a prompt re-establishment of the democratic process and respect of fundamental rights and freedoms in the Asian Country. 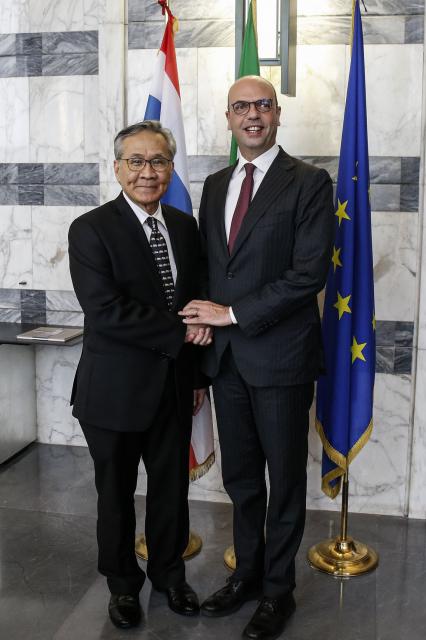 “Our bilateral relations are excellent: the frequency of our meetings testifies to the dynamism and...

"This year we will celebrate the 134th anniversary of the establishment of bilateral diplomatic relations,...

The challenge is to reach 40 billion euros worth of trade with China by 2020,...

Alfano: “Italy categorically condemns the launch of a ballistic missile over Japan”

Kabul bombings. Alfano: “Deep grief and strong closeness to the people and Government of Afghanistan”

“Once again, I express my firm condemnation for the new vile bombing performed in Kabul...

​"The vote that the people of Iran cast in favour of Mr Hassan Rohani, who...

Farnesina: Alfano meets with the Special Advisor to the Prime Minister of Pakistan on Foreign Affairs, Sartaj Aziz

The Minister of Foreign Affairs and International Cooperation, Angelino Alfano, within the framework of periodic...

“I was particularly happy to receive the leader of the Burmese Government: the Italian Government,...