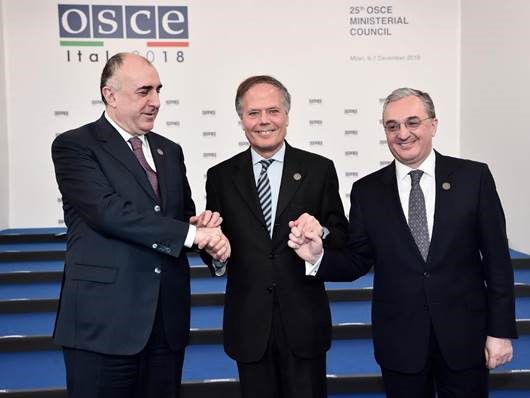 “We are happy that the OSCE Ministerial Council in Milan offered the opportunity for a joint statement by Armenia and Azerbaijan in view of the solution of one of the so-called protracted conflicts in Europe,” said Enzo Moavero Milanesi, the Minister of Foreign Affairs and International Cooperation and current Chairperson-in-Office of the Organization for Security and Co-operation in Europe (OSCE). He went on: “These are tangible results that show the importance of the OSCE as a forum of dialogue.”

In his visit to both Countries and in subsequent meetings with the Foreign Ministers of Azerbaijan and Armenia, Minister Moavero more than once highlighted the opportunity of taking advantage of the OSCE meeting now under way in Milan to make progress in relaunching the dialogue to favour a peaceful and consensual solution to the dispute over Nagorno Karabakh.

In the joint communiqué, favoured by the positive climate created in Milan and also facilitated by the action of the Co-Chairs of the Minsk Group (Russian Federation, France and United States), Armenia and Azerbaijan especially agreed to reduce tension between them and to meet again in the next few months to decide on the future tangible steps to be taken.

Meeting between Minister Alfano and his Azeri counterpart

“Bilateral relations are excellent. Azerbaijan is a trusted partner of Italy, a secular, moderate country...