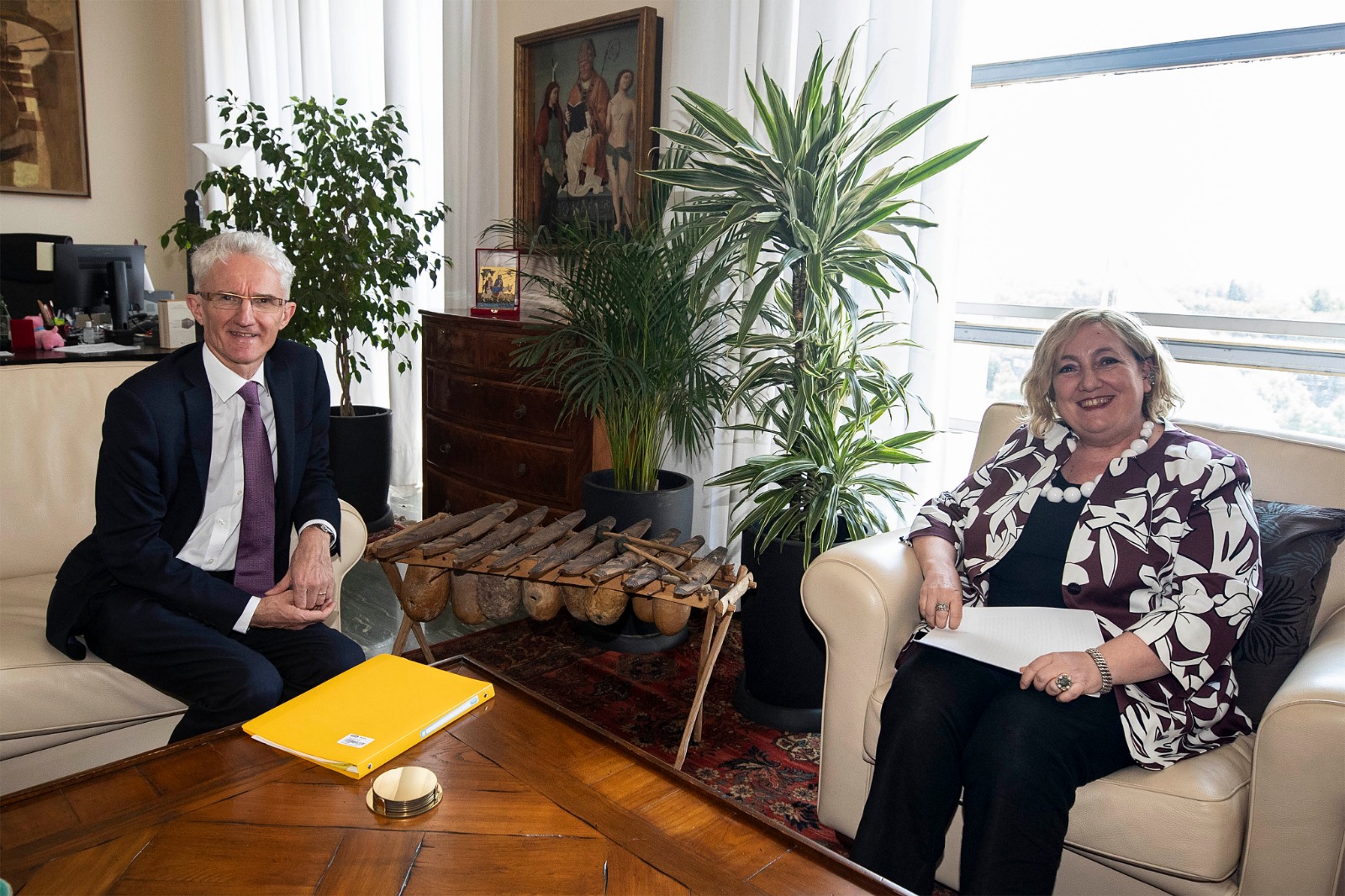 Today the Deputy Minister of Foreign Affairs and International Cooperation, Emanuela Del Re, received the UN Under-Secretary-General (USG) and Head of the UN Office for the Coordination of Humanitarian Affairs (OCHA), Mark Lowcock, at the Farnesina.

The Deputy Minister expressed her appreciation for Lowcock’s commitment to make OCHA’s action more effective, emphasizing that greater decentralization strengthens coordination capacities and helps to better understand people’s needs. “Italy” – the Deputy Minister said – “follows and closely supports the work of the OCHA and has increased its financial contribution in 2019”. Lowcock thanked Italy for its support and stated that he fully endorses our priorities, such as support for women and girls and the fight against gender violence; programs for disabled people; education in situations of protracted crises.
Deputy Minister Del Re then drew her guest’s attention to the humanitarian situation in Libya, expressing the need for a coordinated and more structured approach by the UN agencies (OCHA, IOM and UNHCR) engaged in humanitarian aid to the approximately 700,000 migrants and refugees. Lowcock agreed on this need.
The Deputy Minister then invited the USG to visit the United Nations logistics base in Brindisi in order to explore together its further potential for development and employment in responding to humanitarian crises.
Regarding the Horn of Africa, the region from which the Deputy Minister has just returned from a mission, the two interlocutors agreed on the need to face the current food emergency and to support the ongoing reform and development processes.

Del Re to the UN. Italian Cooperation is committed to reducing disaster risk

Del Re. 2030 agenda and Paris agreement are the pillars for recovery

Vice Minister of Foreign Affairs and International Cooperation, Emanuela Del Re, spoke at "Codeway - Cooperation and Development Expo", a virtual...

Del Re at the ministerial meeting on Covid-19: international cooperation required

Vice Minister Del Re took part via video conference in the 11th Ministerial Round Table...

Vice Minister Del Re in Niger: with humanitarian aid she announces an action plan for migrations

Vice Minister Emanuela Del Re arrived yesterday evening in Niger with the humanitarian flight of...

Vice Minister Emanuela Del Re had an interview in VTC with the UN Sub-Secretary General...

VM Del Re: pandemic is an opportunity for Agenda 2030

Vice Minister Emanuela Del Re spoke in VTC, as an observer, at the Ministerial Meeting...

Del Re visits the WFP for an "Effective Multilateralism"

Vice Minister Del Re in Beirut to coordinate Italian aid

The Vice Minister in charge of development cooperation, Emanuela Del Re, is visiting Beirut today...

Today the Vice Minister for Foreign Affairs and International Cooperation, Emanuela Del Re, had a...