The Ministry of Foreign Affairs and International Cooperation (MAECI), in collaboration with ANICA, launches the project “Corti d’Autore” (Art short films), an initiative of the Directorate-General for the Promotion of the Italy of the Ministry of Foreign Affairs. The project aims at promoting new storytelling of the Italian quality and power of attractiveness after COVID.

The initiative involves the ideation and production of five short films, original and unpublished, by authors nationally and internationally known authors, lasting a maximum of 3 minutes and describing the Italian excellence in five artistic macro-areas: design, architecture, fashion; publishing, Italian language (with regard also to the seventh anniversary of the death of Dante Alighieri); cinema and audio-visual; live entertainment; art and heritage. From 2021 the short films will be broadcast online on the Ministry of Foreign Affairs’ channels. They will accompany the promotion of Italy abroad through the network of Italian Embassies, Consulates, and Institutes of Culture.

“Corti d’Autore” is the result of a long preparatory work that has involved all the associations in the audio-visual world and a creative workshop in which some of the leading talents of the Italian film scene (including Cristina Comencini, Saverio Costanzo, Paolo Genovese, Valeria Golino, Nicola Guaglianone, Daniele Luchetti), who have personally contributed with their reflections to enrich the preparation of the guidelines for participation in the project.

The short films will have to be innovative from an artistic and content point of view, able to show a stable country for its values, its production capacity, and its international attractiveness. The main themes that emerged in the preparation phases of the initiative and that could be the subject of the productions are:

-“The factory of things”. Italy’s leader in knowing how to do well.

– A highly competitive country, much more capable than its self-narrative.

– A beautiful country, which is not afraid to look and tell its contradictions, as it did with Neorealism.

– A surprising country, full of vibrant innovations and young protagonists, beyond the usual clichés.

– The different territories as an integrated expression of widespread beauty and manufacturing roots.

The projects will be selected by a jury of excellence composed of five undisputed personalities from the Italian audio-visual world with an international outlook: Maria Pia Ammirati, Piera Detassis, Monica Maggioni, Ludovica Rampoldi, Gabriele Salvatores.

For Marina Sereni, Vice Minister of Foreign Affairs and International Cooperation: “The know-how, creativity, innovation, the many excellences of our country, the richness and variety of our territories: all this we want to convey with the project ‘Courts of Authors’ that we are presenting today and that will be realized with the precious collaboration of ANICA. Thanks to the talents of our audio-visual sector, we propose a new story of the country, a handy tool available to Embassies, Consulates and Cultural Institutes for the organization of events and initiatives, to show outside the borders the Italy that is starting again and that is ready to change. This project is launched just a few days after the death of the great Maestro Ennio Morricone, whose poignant and unforgettable music, accompanying the images of so many films, have gifted the whole world the magic of cinema”.

Francesco Rutelli, President of ANICA, said: “Italy, to emerge stronger from this dramatic crisis, will have to tell the world in new ways. Our best creative energies – both established talents and young people – are invited by the Ministry of Foreign Affairs to propose audio-visual content for a new narration of the country, its skills, cultural qualities, and attractiveness. ANICA is honoured to be able to contribute to this test of the creative resilience of our country’s system. Let me thank the dozens of subjects and people, authoritative and representative, who with a spirit of service have participated in the preparation of this Call”.

The call rules and project guidelines are published at the following link.

The Call will remain open until 4 September 2020, and the results will be communicated by the 18th of the same month. Projects must be completed by 20 November 2020. 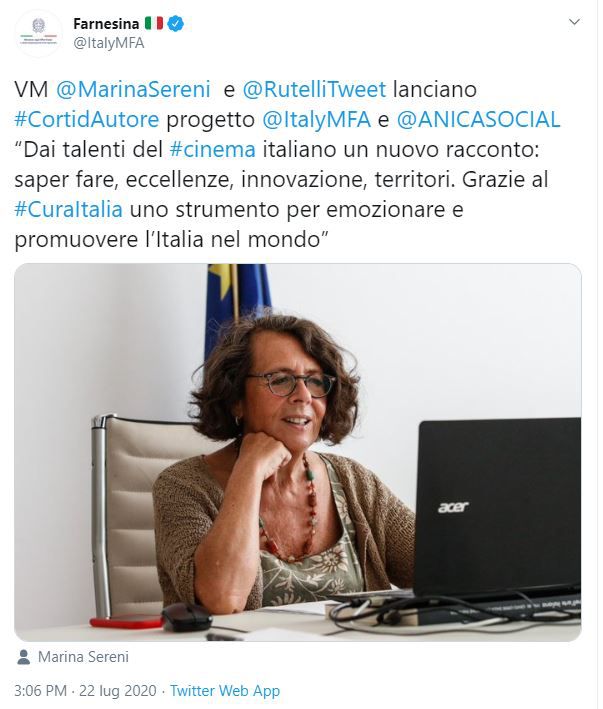 “The absolute star of this initiative is the art system, with its network of museums,...

On Sunday, 21 June, the Festival of Music will feature the first important concert with...

Sereni, #WeareItaly a success, art and culture pillars of recovery

"With this campaign, just at the hardest moment of the epidemic, it was possible to...