On the occasion of Italian Research Day 2022, a Conference on hydrogen technology for carbon neutrality will be held in Vietnam on Thursday 22 April, organised by the Italian Embassy in Hanoi and by the Vietnamese Ministry of Science and Technology (MoST). The event aims to favour an exchange of know-how between Italian and Vietnamese scientists and enterprises and to explore the potential of the most innovative hydrogen technologies in the decarbonisation process.

The conference will be held at the MoST, in a hybrid format; it will be opened by the Italian Ambassador, Mr Antonio Alessandro, and by the Director General of the International Cooperation Department of MoST, Mr Tran Thi Thy Huong. The initiative will be attended by representatives of Vietnamese, Italian and European institutions and enterprises, including Vietnam Academy of Science and Technology, Vietnam Electricity, EU Cluster on Climate, Energy and Mobility, University of Bologna, ENEA, SNAM, Hera, De Nora and Solid Power.

Italy and Vietnam have been cooperating on research since 1992, when they signed the first protocol on scientific and technological cooperation. Since then, more than 40 joint research projects, funded by the Italian and Vietnamese governments, have significantly contributed to research in a number of fields, to the benefit of our citizens. 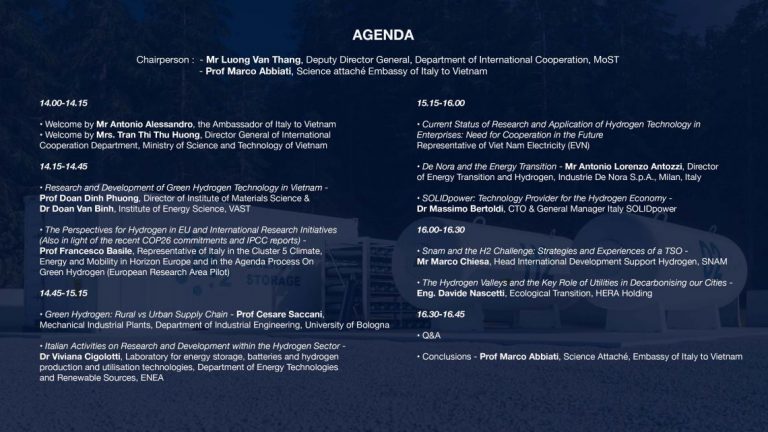 Conference on Italy-Vietnam research to be held on 22 April

The “Vietnam and Italy, Space Technology and Applications. Looking Beyond” exhibition was opened in Hanoi,...

Italy-Australia, workshop on the space industry

On the occasion of the first Italian National Space Day, celebrated on 16 December, the Italian...

The auditorium of the Italian Cultural Institute in Beijing hosted an event to celebrate science...

Conference on artificial intelligence and medicine in Sydney

To celebrate the Day of Italian Research in the World, the Italian Cultural Institute in...

To mark Italian Research Day 2022, the Italian Cultural Institute in Tokyo will be hosting...

The Italian Embassy in Singapore organised a webinar on new technologies in sustainable agriculture, in...

A webinar entitled "The future of water civilisations- Venice lagoon and Mekong delta" was held...