Today at the Farnesina, the Minister of Foreign Affairs and International Cooperation, Angelino Alfano, received the Ambassadors of the Member Countries of the Arab League accredited in Italy.

The meeting offered a good opportunity to take stock of the major themes of common interest and will be followed by the celebration of the Iftar dinner at Villa Madama this evening, which will also be attended by representatives of the Muslim community.

During the talks, attention especially focused on the position of the Arab Countries on the Peace Process in the Middle East, in respect of which the Foreign Minister reaffirmed Italy’s stand in favour of the two-State solution and the resumption of negotiations. Mr Alfano said: “The two-State perspective, the only truly viable one, is in the interest of both of the Parties involved and – in addition to reflecting the legitimate aspiration to self-determination of the Palestinian people – is the one that can best maintain the regional peace that we all want.”

Referring to the crisis zones in Syria and Libya – another issue of debate on today’s agenda – the Minister urged all the regional players to exercise their positive influence on the parties involved, underscoring the importance of international cooperation in fighting terrorism and radicalisation.

“The dramatic crisis in Syria is one of the themes targeted by Italy’s foreign policy, also within the G7,” said Mr Alfano. Then, turning to the Libyan dossier, he said: “The solution of the crisis in Libya can only be political. We are convinced that only through an inclusive process based on strong Libyan ownership, achieved through the reconciliation process envisaged in the Libyan Political Agreement, will it be possible to stabilise the Country and consolidate its institutions.”

Then, turning to Italy’s relations with Iran, the minister said: “Tehran must grasp the opportunity offered by the agreement on its nuclear programme to act constructively, in partnership with the international community, to solve the regional crises. Iran must more resolutely commit to relax tensions by downplaying the conflicts and resuming the political dialogue with the Arab Countries.”

In taking leave from his guests, Minister Alfano said they would meet again at the third edition of the MED Dialogues international conference that will take place in Rome at the end of next November. 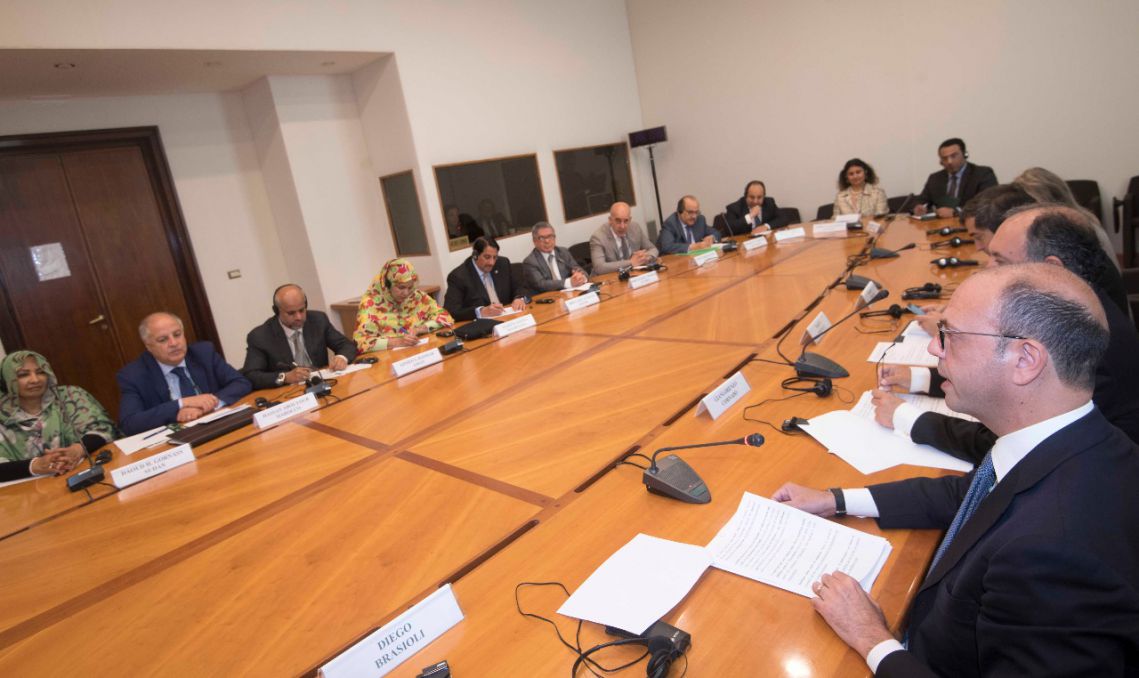 Minister Alfano: "I had a very cordial and fruitful meeting with my German counterpart. As...

Italy-Jordan. Alfano meets his counterpart: "The security of Jordan is a priority for the stability...

Conference on anti-Semitism. Alfano meets his Israeli counterpart: “Italy plays a leading role in combatting all forms of discrimination and intolerance”

On the sidelines of the “Conference on the Responsibility of Countries, Public Institutions and Individuals...

“Algeria is a key partner for Italy. Economic, commercial and industrial cooperation is...

Med Dialogues. Alfano meets with his Saudi counterpart: “Riyadh can contribute to solve the major crises around the Mediterranean”

On the sidelines of the Med Dialogues Conference in Rome, the Minister of Foreign...