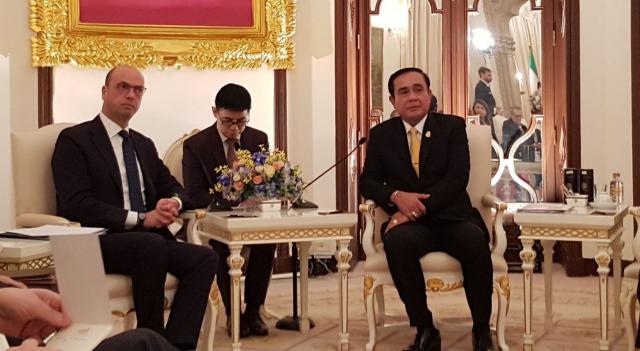 At the end of his visit to Bangkok, the last stop in his three-day tour of Southeast Asia, the Minister of Foreign Affairs and International Cooperation, Angelino Alfano, said: “The celebration of the 150th anniversary of diplomatic relations between Italy and Thailand marks a particularly important moment for our two Countries’ relations. In Bangkok, with a view to celebrating the event together with the Thai people, Italy has organised a programme of 69 events over 299 days of the year. Cultural cooperation represents a fundamental instrument to promote mutual knowledge and friendship between peoples.”

While in Bangkok, Minister Alfano met with his Thai counterpart, Don Pramudwinai, to discuss the state of bilateral relations, emboldened by the dynamic trend in trade (with volumes of around 2.5 billion euros), growing tourist flows (with 265,000 Italians visiting Thailand every year) and relevant two-way investments. The talks also focused on the main regional political issues and cooperation within the ASEAN area. The chief Italian diplomat later met with Prime Minister Prayuth Chan-O-Cha.

In the talks, Minister Alfano expressed Italy’s and the European Union’s great expectation that the Country call new elections, restore an open and inclusive form of representative democracy and full respect for individual human rights. He said: “A quick transition process will pave the way for reopening relations with the European Union at all levels, on the basis of the conclusions passed by the Council last 11 December.”

Minister Alfano also met with the members of the Italy-Thailand Business Forum which groups together 40 large and medium-sized companies of the two Countries, with an over-all annual turnover of 500 billion dollars. Economic cooperation is particularly relevant in bilateral relations. It is no coincidence that the 150th anniversary of bilateral relations dates back to the signing of the first Friendship and Trade Treaty on 3 October, 1868. Today, economic relations between the two Countries are intense and trade is well balanced and has a strong growth potential. In 2017, Thai exports to Italy rose 8% and Italian export to Thailand grew by a comparable 7%.

Minister Alfano on visit to Bangkok

“The celebration of the 150th anniversary of diplomatic relations between Italy and Thailand marks a...

“Frequent official visits and business missions testify to the strength of our  excellent bilateral...

Minister Alfano on a diplomatic mission in Indonesia

“Italy sees Indonesia as a natural partner: we share the same democratic values...