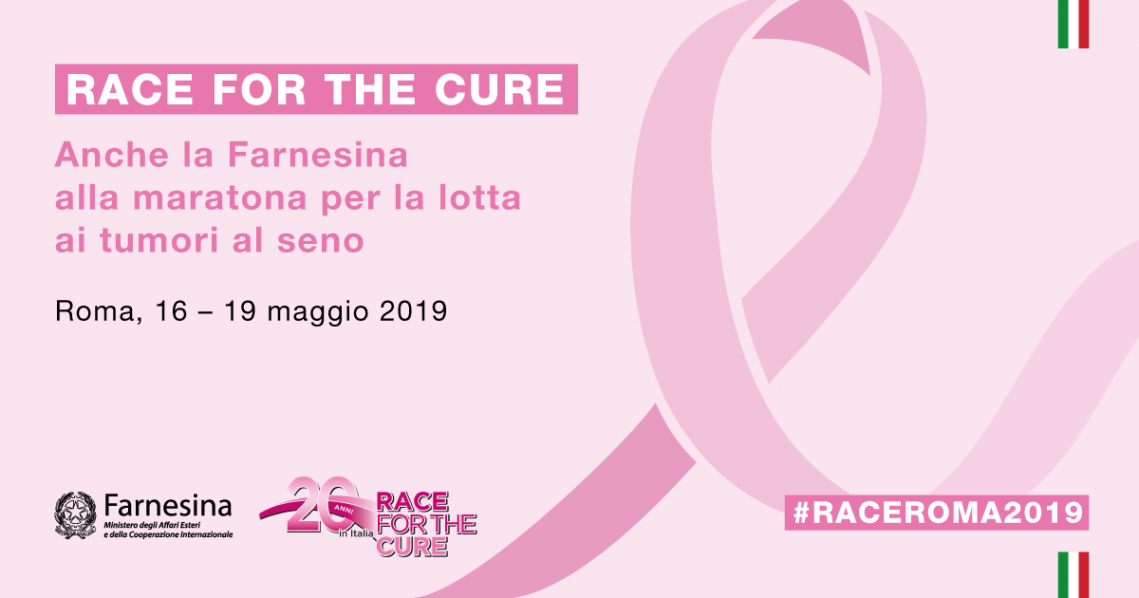 The Race for the Cure, the fund-raiser marathon organised by Onlus Komen Italia to finance the fight against breast cancer, is presenting a new edition this year. The 5 and 2 km Roman stage of the race  (16-19 May) celebrates its 20th anniversary along with the other five legs of the race: in Bari (17-19 May), Bologna and Pescara (20-22 September), Brescia and Matera (27-29 September).

As customary, the Ministry of Foreign Affairs and International Cooperation will participate with its own team. The initiative will be presented on 9 May at 11 a.m. at the Circolo degli Esteri by the President of the Circolo, Luigi Maria Vignali.
“Sign up for the official Race for the Cure website (https://www.raceforthecure.it/) and run with us!”

Migration flows: actions by the Farnesina in North Africa, the Sahel and West Africa

With the Migration Fund, the Farnesina has launched a set of actions for a total...

Minister Luigi Di Maio and Director General Pasquale Q. Terracciano are opening the concluding session of the Conference of the Directors of Italian Cultural Institutes

The Minister for Foreign Affairs and International Cooperation, Luigi Di Maio, and the Director General...

Sport and diplomacy: the MAECI and the FIS present at the CONI “La Bellezza in un gesto”, an innovative integrated promotion format

Conference of the Directors of Italian Cultural Institutes

On Thursday 28 and Friday 29 July the Conference of the Directors of the Italian...

On Thursday 28 and Friday 29 July the Conference of the Directors of the Italian...

Strong condemnation of the capital executions carried out in Myanmar

Italy strongly condemns the capital executions carried out in Myanmar, on the basis of anti-terrorism...

Interview of the Director General for Public and Cultural Diplomacy, Pasquale Q. Terracciano

The Director General for Public and Cultural Diplomacy at the Farnesina, Pasquale Quito Terracciano, participates...