The Minister’s first engagements for the OSCE chairmanship: from the Conference on Anti-Semitism in Rome to the mission to Ukraine and Russia

A large conference on the fight against anti-Semitism was held in Rome with representatives of OSCE Participating States and the leaders of the world’s most important Jewish organizations: Minister Alfano planned this Conference to be his first engagement as Chairperson-in-Office of the Organization for Security and Co-operation in Europe. On Monday morning, the Farnesina’s International Conference Hall hosted 50 international delegations, 20 of which were led by ministers or deputy ministers, to commemorate the tragedy of the Shoah and to reflect on how to combat the new outbreaks of anti-Semitism. It was an important event that was preceded by a solemn moment at the audition with Pope Francis in the Vatican City, which focused on the key topic of the conference: responsibility. Minister Alfano said he was deeply moved by the words of the Pope who urged to “create an alliance against indifference”. 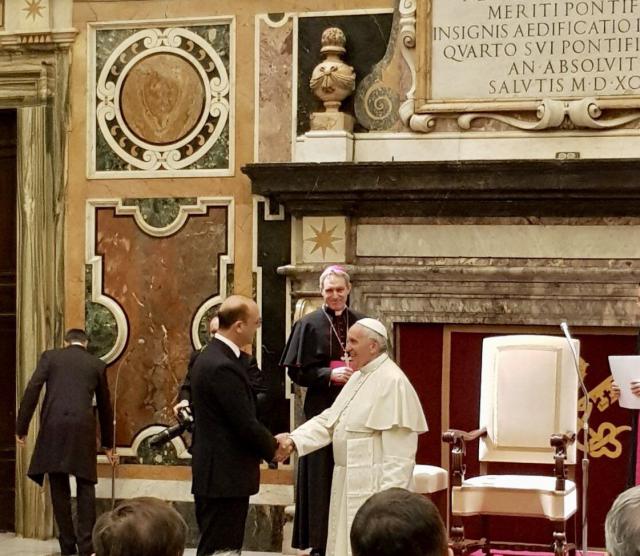 The Conference was structured into a Plenary Session – which opened with remarks by the Minister of Foreign Affairs and International Cooperation and the OSCE Chairperson-in-Office, Angelino Alfano, the Secretary General of OSCE, Thomas Greminger, the Director of the OSCE Office for Democratic Institutions and Human Rights, Ingibjorg Solrun Gisladottir, and the President of the World Jewish Congress, Ronald Lauder – and four discussion panels. Minister Alfano expressed the wish that the conference become a fixed date for the OSCE and recalled that this year marks the 70th anniversary of the United Nations Universal Declaration of Human Rights but also the 80th anniversary of Italy’s adoption of racial laws. “We must be intolerant with intolerance” because “if we sow the seed of dialogue, we will reap the fruit of peace and security. If we sow the seed of hatred, we will reap violence and insecurity. Today we have contributed to sowing the right seed,” said the Minister. 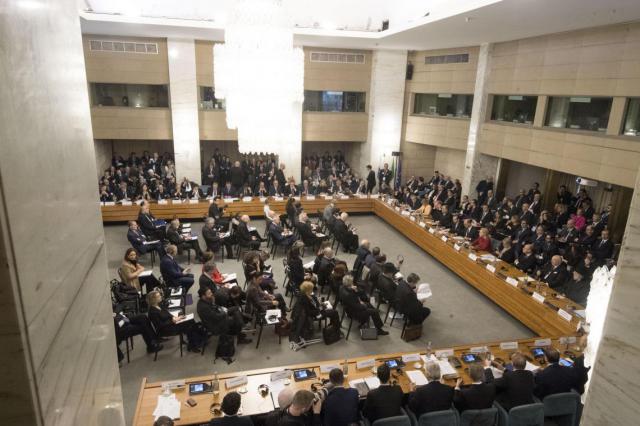 During a break in the Conference, the president of the European Jewish Congress, Moshe Cantor, gave Minister Alfano the Golden Jerusalem Navigator Award for his commitment in the struggle against anti-Semitism. The minister also had bilateral meetings with his counterparts from Israel, Tzachi Hanegbi, Serbia, Ivica Dacic and Macedonia, Nikola Dimitrov.

The week continued on Tuesday, with the engagements in his capacity as the OSCE Chairperson-in-Office in a mission to Ukraine and Russia. In an interview with TASS, Minister Alfano defined Crimea “an open wound” in Russia’s relations with the West and called “unsatisfactory” the progress made in implementing the Minsk Agreements. His first meeting was with his colleague Pavlo Klimkin in Kiev. Minister Alfano said: “The Ukrainian crisis is one of the top priorities of our chairmanship. We are committed to playing an active role towards a solution of stable and enduring peace to the crisis. There is no alternative to the Minsk Agreements.” 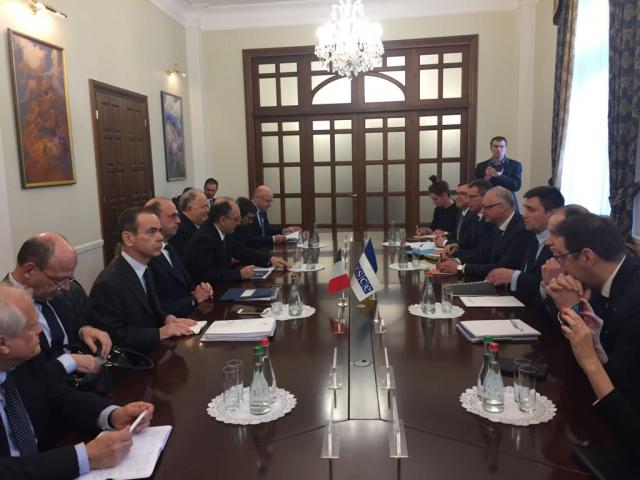 The minister’s engagements in Ukraine included the Italy-Ukraine Business Forum, and meetings with the President of the Republic Petro Poroshenko, and with Prime Minister Volodymyr Groysman, with whom Minister Alfano took stock of bilateral relations, which were judged to be “good but liable to further improvement”.

On Wednesday, the Minister visited Mariupol, in Eastern Ukraine, a visit judged to be “important because my eyes enabled my mind to understand, much better than could exclusively be drawn from reading dossiers, what is really happening in this region. It is a situation that is inacceptable in the heart of Europe”. Apart from speaking as the OSCE Chairperson-in-Office, when speaking as the Italian Minister of Foreign Affairs, Mister Alfano announced: “Considerable support for the International Committee of the Red Cross, UNICEF and the World Food Programme (WFP): Italy wants to give all the support necessary to alleviate the enormously difficult conditions of part of the civilian population.” Minister Alfano expressed Italy’s “full support” to the head of the OSCE Special Monitoring Mission to Ukraine, Ertugrul Apakan. He said: “Your work in a high-risk area for security is crucial for the implementation of the Minsk Agreements and to prevent the dangerous escalation of the conflict.” 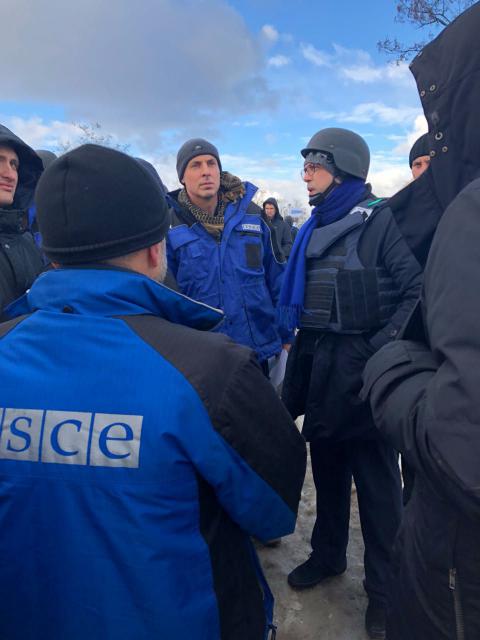 On Thursday evening, the last day of the mission, the Minister went to Moscow where he met with his colleague Sergey Lavrov, to whom he said: “The Ukrainian crisis is a priority for our chairmanship; we must avoid a new escalation and assure the safety of OSCE observers.” He went on: “Italy has taken on the chairmanship of the OSCE with the intention of favouring inclusive dialogue, as we did last year at the UNSC and at the G7. We attribute a strategic role to the OSCE because it has in its DNA the mission to maintain the East-West dialogue open.” Minister Lavrov answered: “The plans of Italy’s OSCE chairmanship are very constructive and we heartily welcome them: Moscow supports Italy’s proposal to strengthen the OSCE vector in the Mediterranean in order put a stop to the migration crisis in Europe.” He added: “From your statements, I understand that you are attempting to tackle these problems not through confrontation but through inclusive dialogue, and I greatly appreciate this approach.” 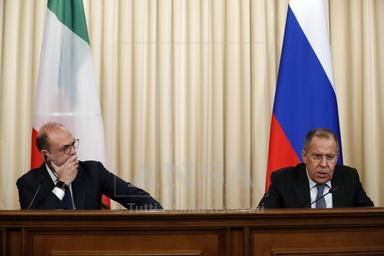 With Lavrov, Minister Alfano also discussed the Libyan crisis, defining 2018 as the year “of the beginning of the end of the transition,” adding that the UN Special Envoy, Ghassam Salamé, “has long been working for an international conference on Libya with a view to coming to free elections: Italy, Russia, the EU and the whole international community are united in supporting the vision of the Action Plan.”

Before leaving Moscow for Rome, Alfano also expressed his wishes for success to the newly appointed Ambassador to the Russian capital, Pasquale Terracciano, recalling his long-dated experience: “It is what we need now, seeing the delicate moment in Moscow’s relations with the rest of Europe.” 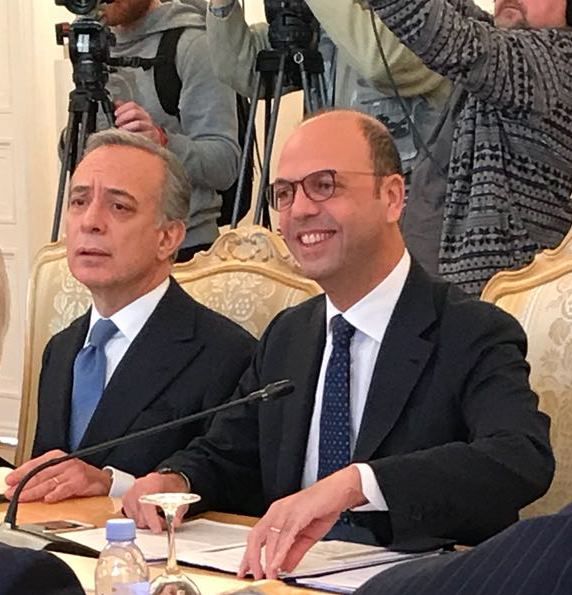 After returning to Rome, on Friday Minister Alfano, met with the leaders of tomorrow at the event Change The World Model United Nations, which is organised annually by the Association of Diplomats: it is a forum in which secondary school and university students from around the world simulate the functioning of United Nations agencies. 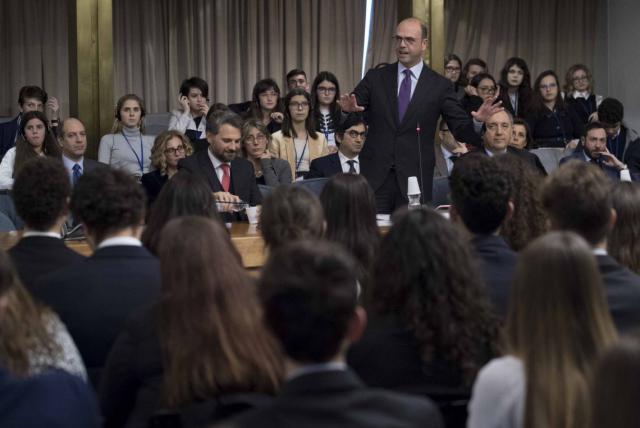 The Minister of Foreign Affairs and International Cooperation, Luigi Di Maio, will speak at the...

As is tradition, Villa d’Este in Cernobbio hosted the ​Forum Ambrosetti “Today and tomorrow’s scenario...

The Minister of Foreign Affairs and International Cooperation, Luigi Di Maio, is in Prague to...

We, the G7 Foreign Ministers of Canada, France, Germany, Italy, Japan, the United Kingdom, the...

Minister Luigi Di Maio and Director General Pasquale Q. Terracciano are opening the concluding session of the Conference of the Directors of Italian Cultural Institutes

The Minister for Foreign Affairs and International Cooperation, Luigi Di Maio, and the Director General...

Sport and diplomacy: the MAECI and the FIS present at the CONI “La Bellezza in un gesto”, an innovative integrated promotion format