On Thursday 25th June at 7 pm, in the splendid setting of the historic Palazzo Venieri, the 13th century model for most of the noble palaces of Recanati, there will be a concert by flautist Fabio Mina and percussionist Francesco Savoretti. They will perform live streaming exclusively for the Italian Cultural Institute of Istanbul.

The concert is one of the appointments of Suoni e Voci del Mediterraneo (Sounds and Voices from the Mediterranean), a review on the languages of world music and their contamination with jazz and contemporary music.

Follow the event online without restrictions and for free by connecting to the YouTube channel or to the Facebook page of the Italian Institute of Culture in Istanbul that organized the concert under the patronage of the Municipality of Recanati.

The flautist Fabio Mina and the percussionist Francesco Savoretti use their instruments in search of the most hidden characteristics; they extend the possibilities with live electronics, effects, synthesizers, going beyond genres, between improvisation and composition, creating a piece of enveloping, unpredictable music, where the contrasting elements dialogue with each other. The idea embodied in the concept of “T-hreschold”, intended as the Boundary/THRESHOLD of a new artistic language looking at tradition but going further, bring us closer to other languages and crosses the boundary of pre-constituted styles. 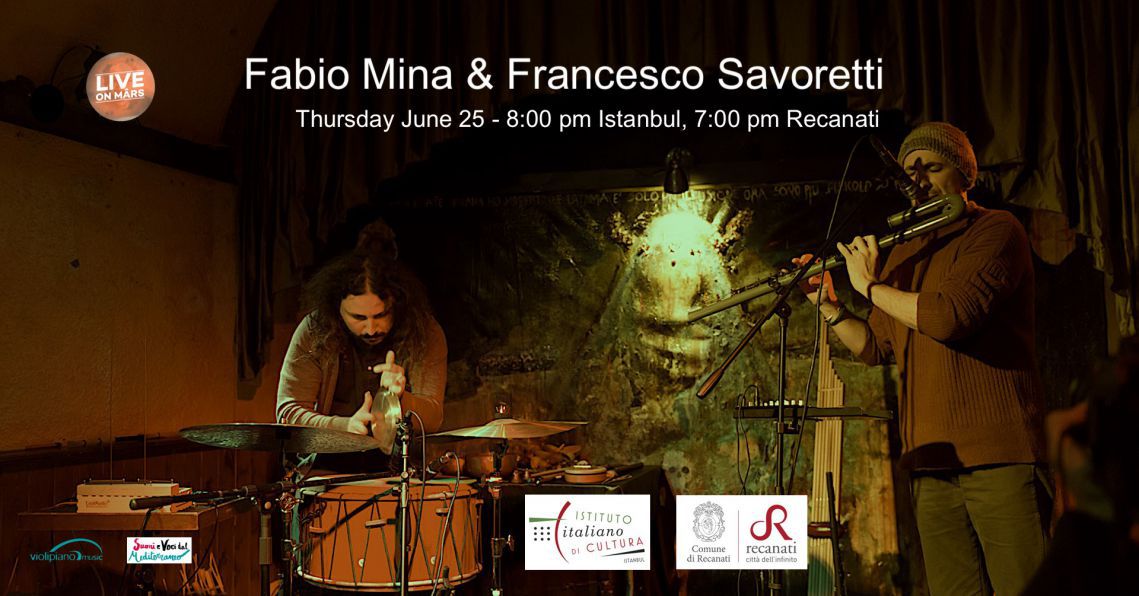 FRANCESCO SAVORETTI: The continuous research of sounds and the attention to the executive dynamics are the most relevant aspects that distinguish his style. His excellent execution and familiarity with the techniques of the frame drums are enhanced by his path towards very personal research of timbre. This peculiarity often leads him to work with multi-percussive sets and to explore different musical genres: world music, contemporary music, ethnic jazz, early music. He is one of the founders of the FRAME DRUMS ITALIA festival, a festival recognized worldwide for the promotion and dissemination of the study of drums in the framework of various traditions.

FABIO MINA: Born in Rimini in 1984 he started studying flute as a child. During his years at the conservatory, in parallel with his academic studies, he began the experience of improvisation looking more and more, as time went by, for a musical space that had no boundaries. He experiences live electronics and studied wind instruments from different parts of the world such as bansuri (Indian transverse flute), duduk (Armenian oboe), khaen (Thai mouth organ) and various types of Jew’s harp. Since 2007 he has been collaborating with the German trumpeter Markus Stockhausen with whom he has performed at various festivals in Italy and Germany and with whom he currently works with drummer Enzo Carpentieri. He plays in a duo with Norwegian guitarist Geir Sundstøl. The main element for his music is improvisation. This language best allows the audience to experience extraordinary moments and express emotions through an introspective listening but also with a view to the outside, to the climate, to the surrounding atmosphere.