The Italian Embassy in Sarajevo presented the annual Italian Film Festival in Bosnia-Herzegovina, featuring a vast film screening program in the Country’s largest cities between 27 June and 3 July 2022.

“The Italian Film Days represent one of the most popular of our cultural promotions among the Bosnian-Herzegovinian public,” said the Italian Ambassador Marco Di Ruzza. He went on: “The 2022 edition of the festival marks a further expansion of our project as we have lengthened the list of cities involved to include the Brčko District and the city of Zenica, which go to add on to Sarajevo, Mostar, Banja Luka, and Tuzla. It therefore represents a huge investment to the benefit of the Bosnian-Herzegovinian people that aims to further consolidate the cultural relations between Italy and Bosnia-Herzegovina, a Country that has always taken center stage in the cinematographic scene both in the Balkans and internationally, also thanks to the famous Sarajevo Film Festival. Our festival therefore intends to symbolically represent a bridge towards Sarajevo’s customary film festival season, an extraordinarily intense and dynamic period for the capital, which welcomes the arrival of film directors and actors from around the whole region and from numerous foreign countries. Italy thus confirms to be a privileged cinematographic partner for Bosnia-Herzegovina, its cinema production and its public.”

The 2022 edition of the Italian Film Days in Bosnia-Herzegovina proposes a selection of comedies, dramas, documentaries, and shorts featuring famous actors like Toni Servillo, Paola Cortellesi, Riccardo Milani, Leonardo Di Costanzo, along with emerging talents and new experimentations. This year’s program is enriched with the results of several experiments in addition to, for the first time, a cooperative effort with the Swiss Embassy in the promotion of Italian-language films by non-Italian authors, such as the case of the Ticino-born film director Erik Bernasconi, whose film “Sinestesia” was jointly presented by the two Embassies in Sarajevo at a special preview event on 24 June. 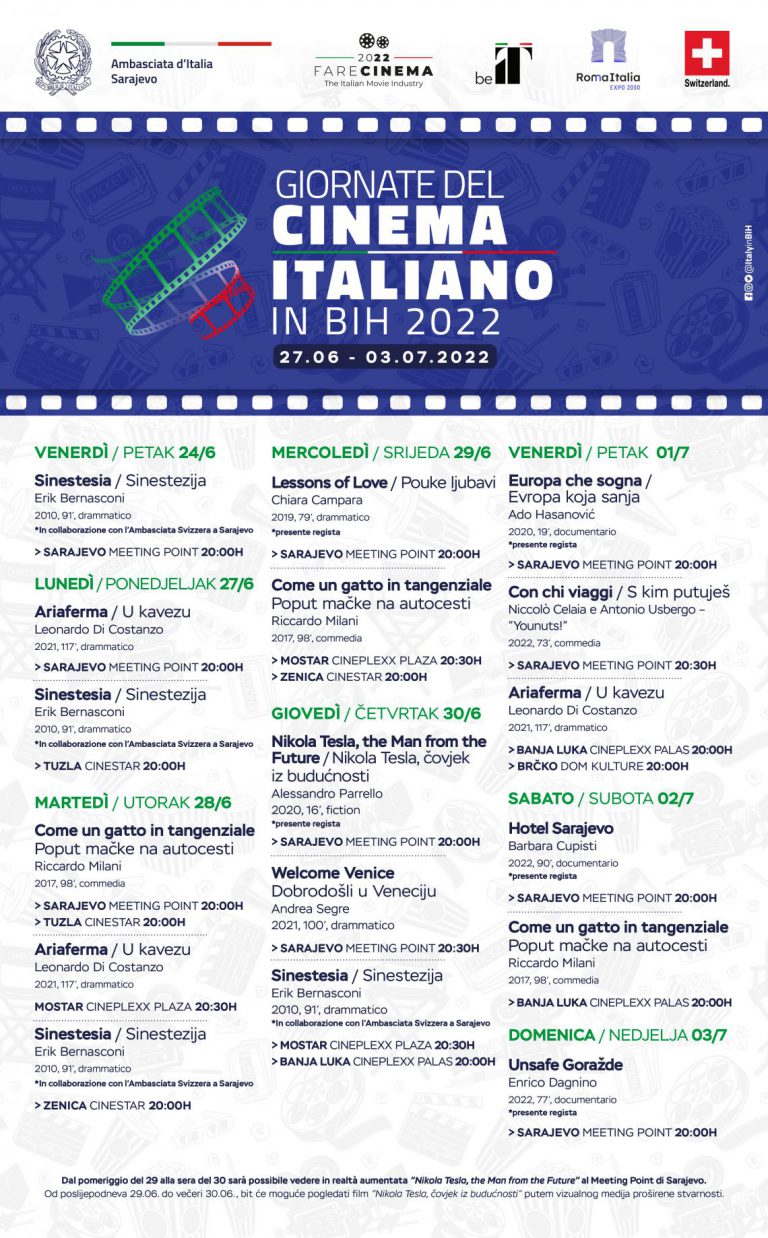 Debate on Pasolini at Palazzo Borromeo

On 20 September last, there was a meeting at Palazzo Borromeo, seat of the Italian...