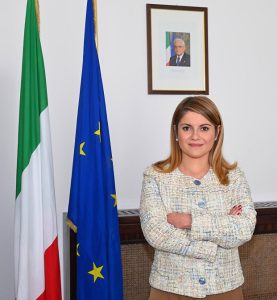 She graduated in International and European Community Political Studies, specialising in International Relations, from the University of Rome “La Sapienza”. In July 2022 she obtained a master’s degree in Economic Security, Geopolitics and Intelligence at The Italian Society for International Organization (SIOI).

She is a former member of the Italian Society of Military History (SISM) and a consultant to public and private institutions.

In the 16th Legislature she was the Popolo della Libertà (PDL) group’s expert in the Chamber of Deputies in the drafting of bills and legal opinions.

She has held various roles of coordination and liaison with regional government bodies such as Governing Councils, Councils, Legislative Assemblies, Departments and the “European Community and International Affairs” Committee. She covered topics such as: international relations with the European Union, European funds, maritime and Mediterranean regions, cooperation with developing countries and migration flows with the State-Regions Conference. The Conference is the foremost body for political negotiations between the Italian State’s central government bodies and the system of Regional Authorities.

Her long career of political activism dates from 2005, when she joined Forza Italia Giovani and covered a number of roles in the coordination of their election campaigns.

In 2007 she was elected to Lazio Region’s Youth Forum, a body representing young people under the age of 35. The Forum expresses opinions at the request of the Council or Regional Council on initiatives concerning the living and working conditions of young people and helps formulate regional policies for youth.

On 27 March 2010 she was appointed National Head of the Organisation Sector of the Italian youth movement, a position she held continuously until the Youth Congress of 11 November 2018.

On 14 December 2011 she was elected Deputy National Secretary of the Young Italians group of the European People’s Party in Brussels, a political grouping awarded the European Charlemagne Youth Prize for projects to involve young people and foster their engagement with Community Institutions.

In the 2014 European elections she was nominated to represent the youth movement in the European Parliament for the Southern Italy constituency, obtaining 15,923 preference votes in the Forza Italia Berlusconi Presidente list.

In the 2018 general election she was elected to the Chamber of Deputies in the Forza Italia lists for the Calabria-02 multi-member constituency.

On 21 June 2018 she was elected Forza Italia Group Leader in Standing Committee IV, “Defence”, in the Chamber of Deputies.

On 19 November 2019 she was appointed by the President of the Chamber of Deputies, Roberto Fico, as a member of the Parliamentary Committee of Inquiry into the death of Giulio Regeni.

In the general election of 25 September 2022 she was one of the youngest candidates for the Senate of the Republic, where she came first of the non-elected Forza Italia members in the Calabria multi-member constituency.

On 31 October 2022 she was appointed by the Council of Ministers as Undersecretary of State for Foreign Affairs and International Cooperation in the Meloni Government.