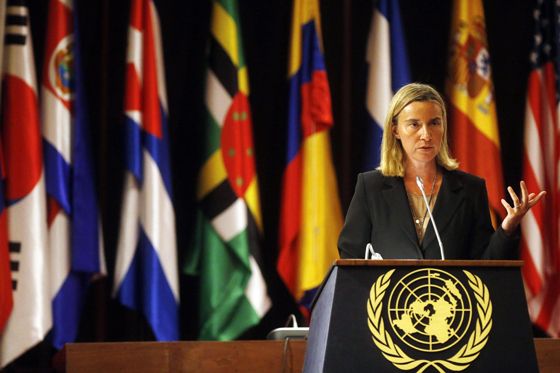 These have been 8 intense months. Before 2014 the world, and our region in particular, had perhaps never seen so many crises all occurring at once and all of exceptional gravity: from Ukraine to Libya, from Gaza to ISIL, from Syria to Iraq to the drama of Ebola.

The “balance sheet” we have drawn up and are presenting here of these 8 months of mine as Minister for Foreign Affairs and International Cooperation reflects the extraordinary pressure and sense of urgency we have experienced during this extremely difficult year for the peace and stability of our region. The intensity and frequency of the contacts, meetings and visits convey the sheer effort involved in managing complex conflicts. But they also convey ouron-going attempts to find exit routes, solutions – even partial ones – and steps forward on pathways that, while never simple, are always possible.

I have tried at all times, in these 8 months, to follow the path of dialogue and discussion, even with the most difficult interlocutors. Especially with the most difficult interlocutors. I have tried at all times to work for the good of Italy and the Italian people, in the knowledge that a significant part of our national interest lies in seeking unequivocal, unitary positions at both the European and trans-Atlantic levels. I have sought to bring to fruition the legacy of years, decades, of foreign policy: that extraordinary, and entirely Italian, ability to speak to everyone (even those who sometimes do not want to speak to each other, or are not interested in doing so), with humility and respect. And all the while trying to understand the complexities without oversimplifying them, and without presumption. I have sought to strengthen long-standing relationships of trust and friendship, which have sometimes been taken for granted, in parts of the world that see in Italy a natural, strong partner – when our country remembers to be one.

And that is not all. I have sought to enhance and build upon the great energies that our country can express in the foreign policy community: from NGOs to think tanks, from local authorities to parliamentary diplomacy. And right up to the Farnesina itself, an administration of the utmost distinction and long traditions, with a wealth of motivated, skilled people, a “community” which Italy needs now and,increasingly, in the future. Anything good or useful that I have managed to achieve in these 8 intense months, I owe to this community, and I wish to thank all those with whom I have had the privilege to work as foreign minister.

One hope remains, a hope that is close to my own heart and that of the entire country: the hope of seeing Salvatore Girone and Massimiliano Latorre come home to Italy, together and for good. We have worked each and every day, under conditions of confidentiality imposed by the situation and which we have observed even at the most difficult times of the political debate surrounding the case. And we will continue not to spare any effort. My thoughts and affection go out to the two riflemen and to their extraordinary families.

From bilateral relations to major international crises, from multilateral fora to the current Presidency of the Council of the European Union. In her 8 months as Minister for Foreign Affairs and International Cooperation, Federica Mogherini has made 77 missions abroad, 23 of them bilateral visits and 54 multilateral engagements.

The Minister visited 5 European Union countries, 8 non-EU countries, 3 countries in the Americas and 7 in the Mediterranean and Middle East regions.

Minister Mogherini attended 54 multilateral events or meetings, 22 in the European Union and 4 in the NATO context. She also took part in the 69th General Assembly of the United Nations, including a long series of events “in the margins”.

To her work abroad must be added her engagements in Rome, where she attended 29 conferences and meetings.

Between 22 February and 28 October 2014, Minister Mogherini had 251 bilateral meetings. Of these, 185 were with the institutional representatives of other countries (39 from the European Union, 57 from non-EU countries, 59 from the Mediterranean and Middle East, 21 from the Americas and 9 from Asia and Oceania). She had 34 meetings with the representatives of inter-governmental organisations (of which 14 belonging to the United Nations system, 8 to the European Union, 4 to the OSCE, 2 to NATO and 2 to the Arab League; she also had 4 meetings with members of other international organisations). In addition, she had 32 meetings with non-governmental organisations, associations, organisations from civil society, other bodies, and Italian companies. 97 of these meetings took place in Rome and 151 abroad, during bilateral visits or missions to take part in multilateral events.

Of the 97 bilateral meetings in Rome, 61 were with representatives of the institutions of other countries (16 European Union countries, 10 non-EU countries, 23 from the Mediterranean and Middle East, 8 from the Americas and 4 from Asia and Oceania). 14 meetings were with representatives of inter-governmental organisations (of which 7 from the United Nations, 4 from the EU, 2 from the OSCE and 1 from the Arab League), 22 with members of NGOs, associations,organisations from civil society, other bodies, and Italian companies.

Of the 154 meetings which took place during bilateral visits or missions to take part in multilateral events, 124 were with the institutional representatives of other countries (23 from the European Union, 47 fromnon-EU countries, 36 fromthe Mediterranean and Middle East, 13 fromthe Americas, 5 fromAsia and Oceania). 20 meetings were with representatives of inter-governmental organisations (of which 7 from the UN, 4 from the EU, 2 from OSCE, 2 from NATO, 1 from the Arab League and 4 with members of the Inter-American Development Bank (IBD), the Organization of American States (OAS),the Development Bank of Latin America (CAF) and the Cooperation Council for the Arab States of the Gulf) and 10 with members of NGOs, associations,organisations from civil society, other bodies, and Italian companies.

Statement by the Foreign Ministries of Belgium, Denmark, France, Germany, Ireland, Italy, the Netherlands, Spain and Sweden on the Israeli raids of six Palestinian civil society organisations on 18 August 2022

We are deeply concerned by the raids which took place in the morning of 18...

Civil Protection: Italy will treat another three people injured in explosion in Libya

CROSS will manage the transfer of the patients The Libyan Air Ambulance carrying three Libyan...