The Minister for Foreign Affairs and International Cooperation, Paolo Gentiloni, received the United Nations Secretary General’s new Special Representative for Libya, Martin Kobler, at the Farnesina today. Mr Kobler was taking part in his first visit to a foreign capital since his appointment.

Kobler’s mandate starts from the proposed agreement advanced by Bernardino Leon and begins at a delicate time, when the vote by the House of Representatives in Tobruk on the agreement is awaited.

During their discussion, Gentiloni took on board Kobler’s assessment of the outlook for the political agreement on his return from his first official mission to Libya, where he visited Tobruk, Tripoli and Misurata for talks. In the coming days the Special Representative will have more meetings with regional actors.

Minister Gentiloni reiterated Italy’s full support for action to ensure that the agreement is signed in the shortest time possible. “I fully agree with Kobler on the strategy to be followed to give further impetus to, and conclude as quickly as possible, the complex negotiations on Libya and enable a government of national accord to be installed”, declared Gentiloni.

“Italy is ready to take on its responsibilities to support the stabilisation of the country after the Libyan parties have reached agreement”, concluded Minister Gentiloni. 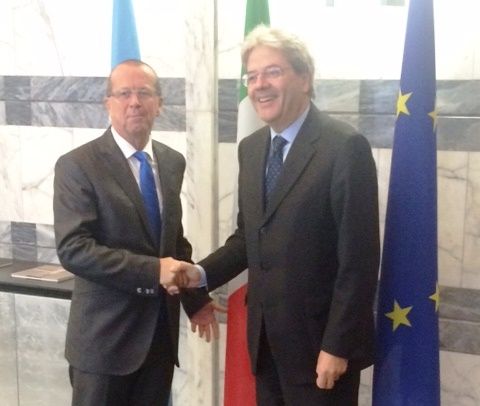 Joint statement by the Foreign Ministers of Italy and Malta

The Ministers of Foreign Affairs of Italy and Malta, Enzo Moavero e Carmelo Abela, referring to...

Today the Minister of Foreign Affairs and International Cooperation, Enzo Moavero Milanesi, met with the...

In delivering his statement this morning at the “Summit of the Two Shores” of the...

On the fringes of the “Summit of the Two Shores” of the Mediterranean being held...

The Minister of Foreign Affairs and International Cooperation, Enzo Moavero Milanesi, will be in Marseilles tomorrow 23...

At the meeting of the Foreign Affairs Council, we had a very positive and productive...

Minister Moavero Milanesi meets with the Vice Chairman of the Presidential Council of the Government of National Accord of Libya, Ahmed Maiteeq

At the Farnesina yesterday, 15 April, the Minister of Foreign Affairs and International Cooperation, Enzo...

During the G7 Foreign Ministers’ Meeting, the following joint declaration on the latest developments in...