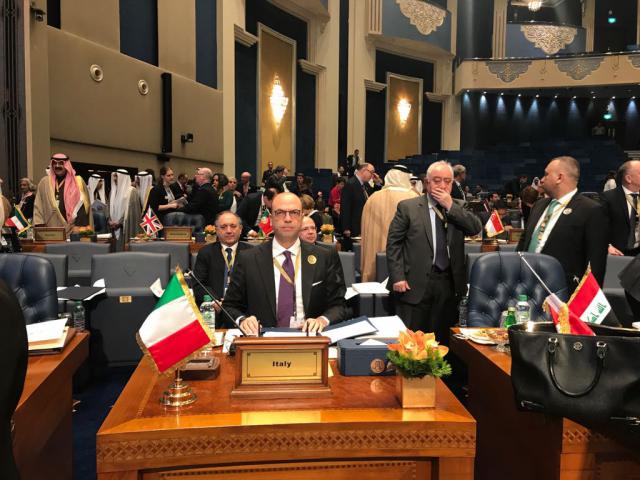 The chief Italian diplomat said: “Daesh’s now imminent defeat must not induce us to neglect the need to preserve the Coalition as a collective instrument of reference in the fight against fundamentalist terrorism, wherever it may be.”

He went on: “In relation to the stabilisation process, Italy is leader in training the Iraqi police forces to be deployed in the liberated areas to assure the security and the rule of law for the population. This is why we will continue to assure Italy’s support in helping our Iraqi friends to stabilise the Country and to restore the peace that they have too long waited for.”

The plenary session of the member States of the Global Coalition against Daesh will take place from 10 a.m. to 2 p.m. (CET) and it will be divided into two working sessions: the first will focus on Iraq and Syria –in which Minister Alfano will address the assembly – and the second will be dedicated to the global dimension of Daesh. In parallel with the Meeting, Kuwait City will also host the Conference for the Reconstruction of Iraq. During his mission, Minister Alfano will also meet with the Deputy Prime Minister and Foreign Minister of Kuwait, Sheikh Sabah Al-Khalid Al-Hamad Al-Sabah, and the Minister of Defence, Sheikh Nasser Sabah Al Ahmad.

The Minister of Foreign Affairs and International Cooperation, Angelino Alfano, is in Tripoli on a...

Alfano: “Total collaboration between Italy and Libya: focusing on growth” The Minister of Foreign Affairs...

Today the Minister of Foreign Affairs and International Cooperation, Angelino Alfano, is attending the Ministerial...

Minister Alfano on mission to Doha

The Minister of Foreign Affairs and International Cooperation, Angelino Alfano, travelled to Doha on Wednesday,...