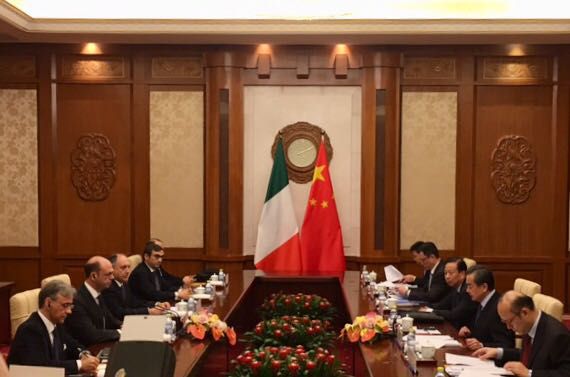 The challenge is to reach 40 billion euros worth of trade with China by 2020, said the Minister of Foreign Affairs and International Cooperation, Angelino Alfano, at the 8th Governmental Committee meeting in Beijing, recalling that 2020 marks the 50th anniversary of the two countries’ bilateral relations. Beijing is already an important trade partner, “with trade volumes just under and sometimes over the 30-billion-euro mark”.

On the first day of the minister’s visit to China, when meeting the press together with his Chinese colleague Wang Yi, Mr Alfano wished for “a solid and balanced growth” in trade on the basis of “open, non-discriminatory and transparent conditions, also through the protection of intellectual property rights and investments”.

At the end of the Committee meeting, the two ministers signed a joint communiqué which was defined to be “a big step forward” on the road to the 50th anniversary of diplomatic relations (‘Road to 50’). Minister Alfano confirmed Italy’s support to China’s One Belt One Road initiative and the will to build “a road of knowledge between Asia and Europe, made up of ideas, innovation, production and progress”. The joint communiqué reaffirms support for the China-EU Partnership for Peace, Growth, Reform and Civilization, supports the advancement of China-EU negotiations for investment agreements and promotes the positive and prompt conclusion of the negotiations on the protection of geographical indications. The two ministers also examined regional and global issues of common interest, with a special focus on the Korean peninsula, the reconciliation process in Libya, the situation in Syria, Afghanistan and Venezuela, cooperation with African countries, the fight against terrorism and the migration emergency in the Mediterranean.

On Tuesday, 19 December, Minister Alfano will meet with the State Councillor for Foreign Affairs and Member of the Politburo, Yang Jiechi, before going to the Italian Embassy to attend a meeting with representatives of the Italian community and businesses residing in Beijing.

The challenge is to reach 40 billion euros worth of trade with China by 2020,...